Fifty Shades of F*cked Up...

I saw the movie Fifty Shades of Gray a couple of evenings ago.  This was a tough choice for me.  I was torn.  On the one hand, I was intrigued by what all the hype was about.  On the other hand, I believe this film glamorizes the the abuse of women and I felt semi disgusted at the thought of giving money to something that encourages this way of thinking.  This is exactly the type of thinking that so many people have been trying to combat for decades now.  The type of thinking that encourages degradation, inequality and abuse of women.  This movie makes it glamorous, sexy and even desirable.  I think this movie is a scary thing for people to be watching and taking in.  I fear a response to my fears from many might be something like "Its just a movie, who cares."  People are very easily influenced.  I think its easy to forget this.  Peoples ideas about life, friendship, romance, what is trendy or good, what is bad, etc are shaped deeply by things like their own close friends habits, the media, etc.  So yes, this movie is a dangerous thing.  I shudder when I hear my colleague tell me that she and her friends saw that film and that she listened as her friends talked about "how they want a guy like that."  Frankly, that scares the sh*t out of me.

I began googling and found an excellent article about Fifty Shades of Gray in regards to this subject.  Here it is below: 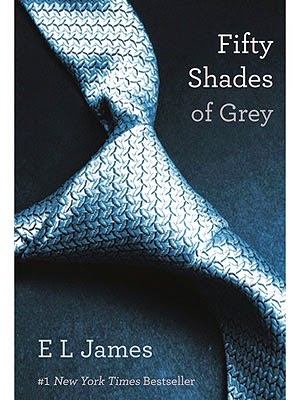 I will admit it. I have read all three books in the Fifty Shades of Grey series.

I am not admitting this because I am ashamed of my sexual desires or even because I feel the need to rant and rave about the poor writing quality of these books. (And it is extremely poor. I set my Kindle to count how many times the word "gasp" is used in the third book and the total was more than 70). I am admitting this because I feel the need to share my opinions about what I consider to be the incredibly -- and dangerously -- abusive relationship portrayed in the books.

When I first heard about Fifty Shades of Grey and learned they began as Twilight fanfiction, I swore I would not read them. I have read all of the Twilight books and I did not enjoy them. I found the relationships between Edward and Bella and Bella and Jacob to be patronizing and emotionally abusive, and I also thought the writing was pedestrian at best and boring to read. Why would I devote the limited amount of time I have for reading for pleasure to a series like this?

But as the dialogue about Fifty Shades of Grey increased, both in the media and amongst my friends, my curiosity was piqued. I attended a talk titled "Fifty Shades of Grey - Bad for Women, Bad for Sex" and decided that I should see what all the fuss was about.

To quote the book, I gasped. I rolled my eyes. I even bit my lip a few times. But not for the reasons Anastasia, the protagonist, did. I did out of exasperation, boredom and disgust, but also out of fear. After reading this book series, I am deeply afraid that this type of relationship will be viewed as the romantic ideal for women. And I consider that to be extremely dangerous -- much more so than anything that takes place between Christian and Anastasia in the Red Room of Pain.

Could the character of Anastasia Steele be any more of a stereotype? She is an introvert, has low self-esteem, has abandonment issues from her father, apparently has only one close friend who bullies her and even though she works in a hardware store, she doesn't seem to possess any self-sufficiency aside from cooking for her roommate and herself. She seems to have no sexual identity until Christian Grey enters her life and requests that she become his Submissive in a sexual relationship.

In order to be Christian's submissive, Anastasia is expected to sign a lengthy and detailed contract that, amongst other requirements, requires that she exercise four days a week with a trainer that Christian provides (and who will report to Christian on her progress), eat only from a list of foods Christian supplies her with, get eight hours of sleep a night and begin taking a form of birth control so Christian will not have to wear condoms. Anastasia negotiates a few terms of the contract with Christian (she only wants to work out three days a week, not four), but all of her negotiations are only within his framework -- none of the terms are hers independently. Nothing in their relationship is hers as an independent.

The character of Christian Grey is a rich, superpowered businessman who was abused as a child. He is in therapy, and Anastasia frequently references his therapist, but based on how he treats Anastasia, he doesn't seem to be making much progress. As Anastasia's relationship with Christian progresses, his controlling tendencies affect her life more and more. When her friend takes portraits of her for his photography exhibit, Christian buys all of them, because he does not want anyone else looking at Anastasia. (They weren't even in a relationship when he did this.) When she is hired as an assistant at a publishing company, he buys the company -- to make sure she's "safe" working there. When she goes out to a bar with her one friend, against his wishes, he flies from New York to Washington State that same night, just to express his anger -- and exercise his control over her. When she does not immediately change her name at her office (in hopes of maintaining some professional autonomy, given that he bought the company she works at), he shows up, unannounced, at her office, in the middle of her workday, to pick a fight with her. When she asks why it is so important to him that she change her name, he says he wants everyone to know she is his.

Christian's possession of Anastasia is the cause of much of my disgust and fear of the book's influence on people and how they view romantic relationships. After they exchange their wedding vows, the first words he says to her are, "Finally, you're mine." The control he exercises over her does not reflect his love for her; it reflects his objectifying of her. Christian never views Anastasia as a person, let alone an independent woman. He wants her to obey him, and even though she refuses to include that in her wedding vows, it is exactly what she does. When her mother questions her choice to keep her wedding dress on rather than change before traveling for her honeymoon, she says, "Christian likes this dress, and I want to please him." Her desire to try some of the "kinky fuckery" in his Red Room of Pain comes from wanting to demonstrate her love for him, not her own sexual desires.

Wanting to please Christian apparently includes subjecting herself to verbal and emotional abuse from him 'til death do them part, because any time she tries to stand up to him -- which isn't often -- he berates her, guilt trips her and beats her down verbally until she apologizes and submits to him. After she uses the "safe word" in the Red Room of Pain so he will stop, he bemoans his sad state of mind later, mentioning that his "wife fucking safe worded him." He is not concerned with her well-being or why she felt the need to use the safe word. He only cares about how it affects him.

The question that I kept asking myself as I read the books was why Anastasia stayed with Christian, and the answer I found was that she has absolutely no sense of self worth. She only feels sexy when he says she is, and when he insults or patronizes her, she accepts what he says as the truth. One of the passages that disgusted me the most was when Anastasia was at a club with Christian, dancing and thinking to herself that she never felt sexy before she met him and that he had given her confidence in her body. Yes, being with a partner who frequently compliments you can increase your confidence, but Anastasia went from zero to one hundred thanks to Christian. None of that came from within herself. Because of his influence on her, nothing in her life came from herself -- her job, her home, her way of life, or even her self-esteem.

The co-dependency between Anastasia and Christian is alarming to read and even more to contemplate. When she breaks up with him at the end of the first book, the second book finds her starving herself and wasting away to nothing until he contacts her again. When she thinks his helicopter has crashed in the second book, she thinks to herself that she can't live without him. Their marriage only comes about because he is scared she will leave him, and when she asks what she can do to prove to him she isn't going anywhere, he says she can marry him. Yes, origins of insecurity and desperation are a great start to a healthy marriage.
When Anastasia finds herself unexpectedly pregnant and shares the news with Christian, he rages at her, asking if she did it on purpose and storming out of the house, disappearing for hours. Even though Anastasia thinks to herself that the pregnancy happened too soon in their marriage, she never considers terminating it.

The themes of the novel -- that love alone can make someone change, that abuse from a spouse is acceptable as long as he's great in bed, that pregnancies should always be carried to term even if the parents are not ready to be parents, and the ridiculously antiquated, Victorian idea that the love of a pure virgin can save a wayward man from himself -- are irrational, unbelievable and dangerous.

Our culture has seen a radical shift of ideals moving towards traditional gender roles and Fifty Shades of Grey is a shining example of that. Early marriage to one's first sexual partner, having a baby even when saying neither of the partners is ready to be a parent, and submission to one's husband as the head of the household are all aspects of life that feminists and progressive thinkers have worked to move beyond.

Anastasia and Christian's relationship is not romantic. It is abusive. The ways he tries to "keep her safe" are not masculine or sexy. They are stalking. Fearing one's husband's reaction to an unexpected pregnancy is not normal, because "boys will be boys." It is sad and dangerous and should not happen in a healthy relationship.
Fifty Shades of Grey was one of the best-selling books of the year.

Sex toy classes have been inspired by it, as have new types of cocktails. The film adaptation is already in the works. I sincerely hope that honest discussion will be had about the book and that the Christian Grey ideal of romance is not one that will be perpetuated throughout our culture. The best way that can happen is through open, honest dialogue that leads to healthy relationships of two equal partners. That, in my opinion, is sexier than anything that can happen in the Red Room of Pain.

And here is a direct link to the original article.