The world-famous Vienna Boys Choir. I am seeing them LIVE tonight!!!

Today was a GREAT day :-D for more then one reason.  But first off...

A hugely exciting thing is happening to me tomorrow night (Saturday evening).  I will be seeing the Vienna Boys Choir, LIVE.  They sing absolutely beautiful Christmas carols.  They are world famous.  I love listening to them.  Here is a short bio on the Vienna Boys Choir: 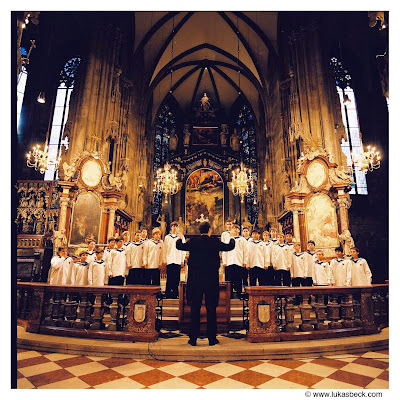 The Vienna Boys have been singing at the court of the Holy Roman Emperor since the early 15th century. In 1498, more than half a millennium ago, Emperor Maximilian I moved his court and his court musicians to Vienna. He gave instructions that there were to be six singing boys among his musicians. Historians have settled on 1498 as the foundation date of the Vienna Hofmusikkapelle and in consequence the Vienna Boys Choir. Until 1918, the choir sang exclusively for the imperial court, at mass, at private concerts and functions, and on state occasions.

In 1918, after the breakdown of the Habsburg Empire, the Austrian government took over the court opera, its orchestra and the adult singers, but not the boys’ choir. The Vienna Boys Choir owes its survival to the initiative of Josef Schnitt, who became Dean of the Imperial Chapel in 1921. Schnitt established the boys’ choir as a private institution. The former court choir boys became the Wiener Sängerknaben (Vienna Boys Choir), the imperial uniform was replaced by the sailor suit, then the height of boys’ fashion. Funding was not enough to pay for the boys’ upkeep, and in 1926 the choir started to give concerts outside of the chapel, performing motets, secular works, and - at the boys’ request – children’s operas. The impact was amazing: Within a year, the choir performed in Berlin (where Erich Kleiber conducted them), Prague and Zurich. Athens and Riga (1928) followed, then Spain, France, Denmark, Norway and Sweden (1929), the United States (1932), Australia (1934) and South America (1936).

Today there are around 100 choristers between the ages of ten and fourteen, divided into four touring choirs. The four choirs give around 300 concerts and performances each year in front of almost half a million people. Each group spends nine to eleven weeks of the school year on tour. They visit virtually all European countries, and they are frequent guests in Asia, Australia and the Americas.

Together with members of the Vienna Philharmonic Orchestra and the Vienna State Opera Chorus, the Vienna Boys Choir maintains the tradition of the imperial musicians: as Hofmusikkapelle they provide the music for the Sunday Mass in Vienna’s Imperial Chapel, as they have done since 1498. On 1 January 2012, the choir participated for the fifth time in the New Year’s Concert of the Vienna Philharmonic Orchestra, conducted by Mariss Jansons.
I highly recommend listening to a few of their carols, such as O Holy Night, God Rest Ye Merry Gentlemen or We Three Kings.

Anyway so how did this come about, I am sure you are wondering.  Today (Friday) I was meeting with Sally, the English woman with whom I have become friends with for tea.  We had great conversation and lots of laughs.  We talked about relationships, books, music and other fun life stories.  Then she told me, "Oh my gosh, Brooke!!!  I have something really important to tell you that I almost forgot!  I was looking in the booklet the other day for the Alte Oper (the opera house in Frankfurt) at the upcoming shows and was shocked to see the Vienna Boys Choir is playing there tomorrow night!!!  I remember you mentioning how much you would love to see them live sometime in Vienna.  I bet if we drink our tea fast and head over there now, we could see if they still have tickets.  If you would like to, I would walk over there with you."

Absolutely I wanted to!!

We took the subway over and surprisingly, they still had some tickets left!!!  And some for only 20 euro each (up on the balcony but still with a decent view and one can hear up there perfectly, she told me).  Sally turned to me and asked, shall we??  I said, yes!!!  Lets do it.  I would LOVE that!

So we snagged two tickets for 20 euro each for tomorrow night together.  Tomorrow evening; I will be seeing the Vienna Boys Choir LIVE!!!!!!!!!  I am incredibly thrilled for this.  I have a feeling it will be magical :-)
Posted by missbrooke28 at 6:11 AM