The hosting of my FIRST dinner party, totally solo!!!

I had a pretty wonderful experience this past weekend.  Happy Thanksgiving (to all my American loved ones especially :-)) this week, by the way. 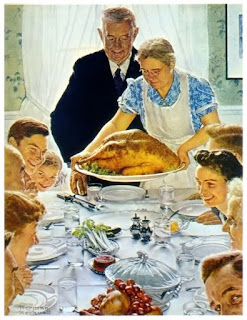 Throughout my life up until this point, whenever I have thrown or hosted a party, I have always had a co-host (usually whomever I have been in a relationship with at that time).  I have never hosted a party by myself before.  Therefore, despite the longings I was feeling to host a Thanksgiving dinner party sometime in the next couple of weeks, I found myself hesitating nervously.  Host it alone???  So much pressure!!!  I would feel worried about everyone enjoying themselves and clicking well, I would worry about all the food I make coming out well, that everyone feels comfortable and about being a good host!  I would worry that everything turns out alright and that the party is a success in general.  If it wasn't up to par, people likely wouldn't want to come to future parties I might throw!!!  Each time I considered the idea, my stomach fluttered with nerves.

However, ultimately I decided, pffffft, screw that, of course I am going to host a dinner party solo.  Why on earth do I need someone by my side in order to host a party!?  No way.  I can absolutely handle this myself.  Even if the idea cares the crap out of me.  All the more reason to do so and challenge myself.  So, the invitations went out.

I went a step further and was even slightly more daring.  Instead of inviting my usual crowd of friends, I invited a totally new mixture of people.  Some new friends along with some longtime ones.

And finally, at the last minute, one of the new friends I had invited told me that her sister had booked a flight from London to Frankfurt to visit her that very weekend, and might I mind if her sister joined?  ALONG with a friend whom her sister would also have in tow?

Coupled with my ultra tiny kitchen (literally, nine people was going to be a massive squeeze. I had originally capped my invitation list at just 7 friends, making it very difficult to pick and choose), along with the fact that I didn't know these two people, this added yet another wild card to the upcoming dinner.  What if these two women were totally weird?  Or awkward and antisocial?  Who knew what could transpire.

However, I decided it was going to be an awesome night and pushed my worries aside, instead allowing myself to feel excited anticipation and joy (yes, still coupled with my fluttering nerves).

On the invitation, I made the dinner a Thanksgiving Potluck, inviting everyone to bring the dish of their choice (whether it be drinks, a side dish, dessert, etc).  An unfortunate development occurred the week before my dinner which involved my discovery of having to work THE day of my dinner party.  My school was having what is called an "open day", during which people can pop in to take a look inside the school, anyone from the community, just to check it out.  This would take place from 11am-2:30pm.  Therefore, I informed my guests that my previous plan of making a turkey sadly wouldn't be realized, as I now wouldn't have the time.  But reassured them that I would still make something delicious.

That was when Judith, one of my closest friends here in Frankfurt, stepped up to the plate and offered casually "I will make the turkey."  Whaaaaaaaaat???  Not only was she offering to put in the hours required to make a turkey (her FIRST time ever), but she was also somehow going to transport this to my apartment!!!  Literally across the city.  I was shell shocked.  How incredibly awesome of her.  I assured Judith excitedly that she would have an honorary seat at the Thanksgiving table, no doubt.  And that she was absolutely marvelous for even attempting this, regardless of the result.  What a way cool woman.

The evening before the party, I baked from 8pm until 11pm.  A homemade-totally-from-scratch pumpkin pie with a shortbread crust, and brownies swirled with pumpkin cream cheese as well as Oreos.

The next day, I put my time in at work, counting the minutes until I could leave so as to finish my party preparations.  Upon the clock striking 2:30pm, I raced into the city, picking up a few last minute items I needed.  Upon arriving home, I sat on my bed stuffing the little gift bags I had purchased and wanted to put together for each guest.  Inside each bag were Christmas tree shaped marshmallows, chocolate truffles, marzipan balls, a cookie cutter and a delicious Swiss cookie with chocolate on top-yum.  I wrote out a little card to each person, listing the things about them personally that I was thankful for,

I decorated the table and baked my Moms recipe for homemade macaroni and cheese, a dish that has always been an all time favorite of mine since I was a child. 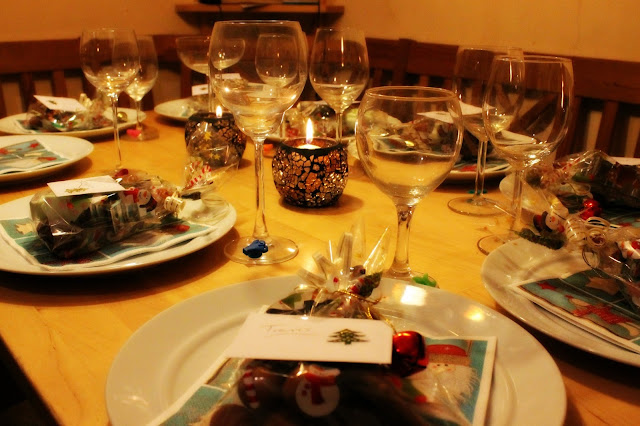 And then I awaited my guests.

Judith and Bhakti arrived closely together, Judith with the turkey in tow!!!  She carried it in a large copper pot!!!  Hahaha, hilarious, loved this.  We reheated it in the oven, and it came out delicious!!!  Moist and yummy.  Everyone was commenting on it.  Bhakti supplied our dinner with lots of accompanying garlic bread. 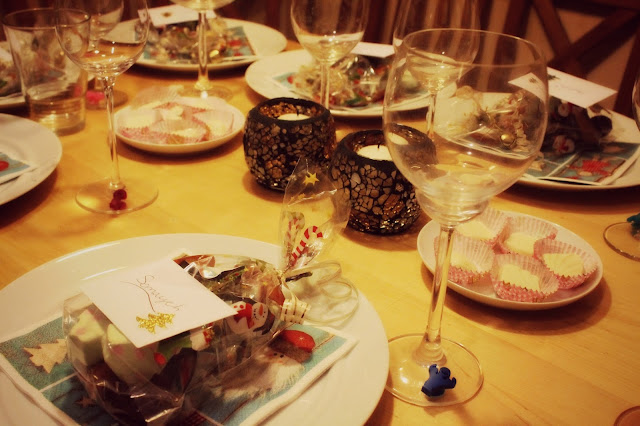 Harry and Lucy, along with her sister, Laura and Laura's friend, Hannah showed up with an ultra cheesy cauliflower dish as well as a delicious sweet potato, spinach and cheese dish in tow.  Travis came loaded with drinks, numerous varieties of wine as well as some juices and sodas filling his arms.  Somayeh came armed with a fresh and tasty salad.  I laid out chips and salsa, along with my pumpkin pie, brownies and homemade macaroni and cheese.

Upon everyone's arrival, the kitchen grew bustling, lively, cozy and loud right away.  People were chatting warmly and getting to know one another.  I bumped into a cabinet sending two bowls full of my flatmates breakfast for the next morning (a mixture of seeds and the like) crashing to the floor.  This started the party off with a bang, that's for sure!!!  Travis and Judith rushed to help me clean it up, all of us laughing about it. 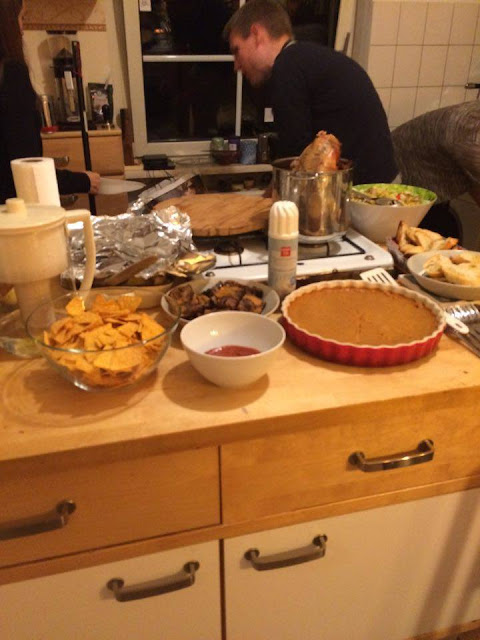 Before we sat down to the meal, someone made the comment "Oh man, nine names to remember, that's a lot!!"  I laughed out loud and responded, "well actually, it isn't just nine.  Everyone will have two names tonight...via a game we will be playing" as I chuckled sneakily and smiled at everyone.  I took out the name tags I had prepared prior with a smattering of names listing famous people, characters, etc.  One name was written on each name tag.  The list included: Albert Einstein, Johnny Depp, Santa Claus, Darth Vader, Michael Jackson, The Joker, Abraham Lincoln, etc.  I placed a name-tag at random on each persons upper shoulder so that they couldn't see it, yet the rest of us all could.

I explained to everyone "so, as we go about our normal, getting to know one another, talking about whatever, dinner conversation...if the opportunity presents itself for you to make a fitting comment in relation to the name-tag that person is wearing, please, do so.  This will create a sort of fun, witty, silly conversation and banter thrown into our already normal chatter.  And whomever guesses their character or person first is basically just awesome."  Everyone buzzed with excitement and energy over this as the conversation began.

This game resulted in SO MUCH laughter!!!  We did go about the normal chatting of getting to know one another, but when moments presented themselves, we threw in sly comments alluding to whatever each persons "alter ego" was, listed on their name tag.  For example, when my friend Somayeh said something polite and warm to another party goer, I looked at her pointedly and commented, "Isn't that a little polite and kind for you?  I am pretty sure you would just kill them straight off instead," looking pointedly at her "Darth Vader" name tag and smiling mischievously.

When Lucy made a comment about something related to children or alluding to a younger spirit, one of us piped up "ahhh yes, you would say that, wouldn't you?" chuckling as we all glanced at her name-tag listing the name "Michael Jackson."  So, this game was just a blast, resulting in lots of laughter and fun. 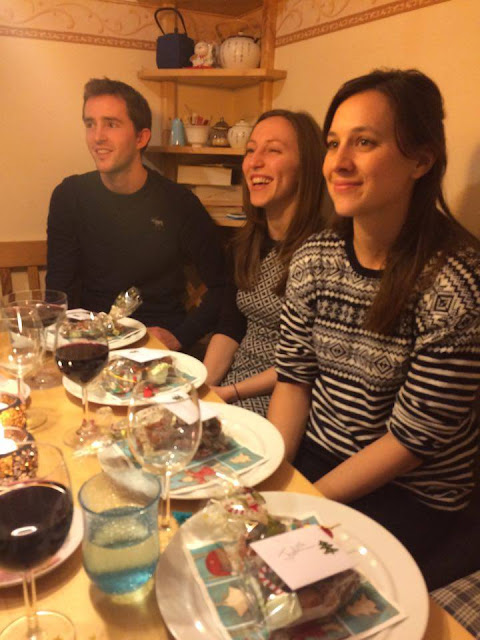 In fact, people liked it so much that once we finished, they chorused in unison "lets play it again!!!"  Everyone ripped off their name tags, scribbling a new name of their choice onto the tag and then sticking it on the person sitting across from them (without that person having seen it).  This resulted in another lively, entertaining round full of howling laughter.

Our two guests whom I had never met before, Laura and Hannah, were fantastic.  Laura was so incredibly animated, witty, silly and did some of the best character impersonations and voices I have ever seen in my life in a person!!!  She was such fun, warm, talkative, really engaging and just really a blast to have at the table.  Hannah was slightly more subdued but was equally lovely and a welcome addition to the party.  She too was warm, talkative, engaging, friendly and funny.  I am so glad I was able to meet both of them and that they could join us.  They were wonderful additions to the party. 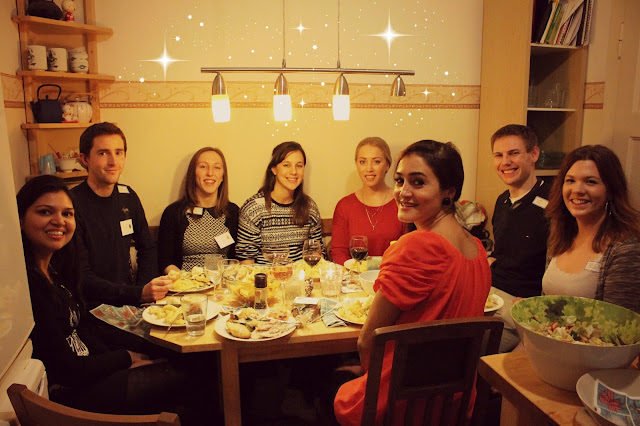 At the end of the dinner (as we came to about the four hour mark :-D), someone came up with the idea that we each go around the table and mention something we are thankful for.  I was touched and impressed when Hannah mentioned "I am thankful because I grew up with a mother who had zero body image issues, so I have no concern for slightly wobbly bits or trying to look perfect."  Wow, how awesome.  We need more women like this around us as role models.

Other people mentioned being thankful for their parents, their friends, cheese, books, coffee and their health.

Everyone departed around 11pm with smiles, thank yous and hugs.

I am SO glad I could conjure up the guts to throw this party.  It was such an outstanding evening, just great fun.  I will absolutely do something like it again, no question.  The only way it could have been more perfect would have been if my best friends from the US could have been there too.

This was another important learning moment for me, as well as a confidence building moment and just a joyful experience in general.  I was able to push myself to do this on my own, and it turned out wonderfully.  Though of course, this wouldn't have been so without ALL of the stellar people I invited. 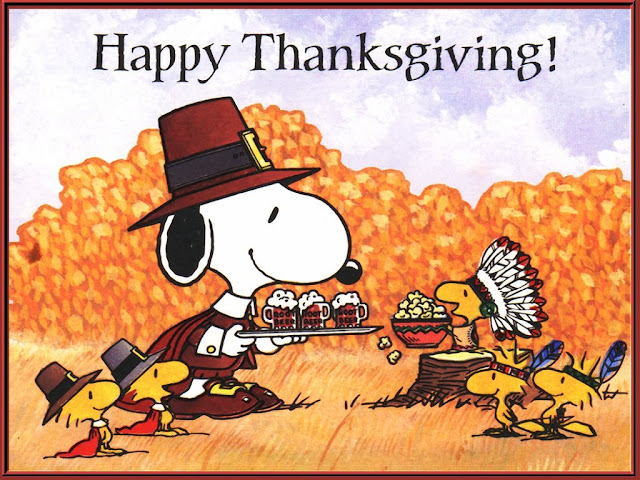