We Are a Culture That Makes Light of and Encourages Substance Abuse. 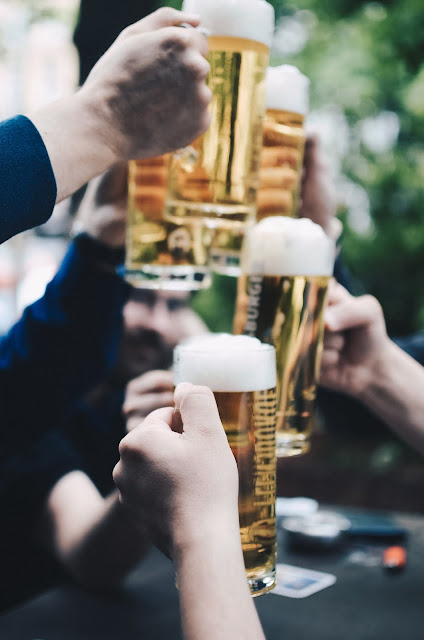 Look closely across the cultural landscape, specifically with regard to alcohol.
Happy hours, and two for one drinks. “Ladies Night” and “80s Night.”
Weddings, birthday parties, Christmas and Thanksgiving, all most certainly celebrations during which alcohol is served up and consumed in abundance. It being unquestionably assumed that this is a given on any holiday or celebratory occasion. (Hell, Oktoberfest is a holiday that revolves and centers around the act of drinking, period). And, each of these is often used as an excuse to “let loose”, semi lose control, and thus, drink too much.
Housewarming gifts are frequently bottles of alcohol.
Someone I know, for every instance of someone new landing a position with the company he works for and then beginning working there, it is recognized with a scotch tasting.
Upon boarding an airplane, flight attendants serve hard liquor, wine, and beer alongside water and soda. Alcohol just being a given option and considered a norm.
Keg parties, beer pong, beruit, funneling alcohol, and power hours.
“What a week, I need a drink to relax,” people frequently say. Our society normalizes and even encourages the using of substances in order to manage our emotions and “feel better.”
During the Superbowl, alcohol commercials run abound.
On turning 21, we celebrate this person's newfound permission to drink alcohol as though they’ve achieved something significant, profound, thrilling, and life-changing.
Television shows, movies, and songs are often paired with drinking, made into “drinking games.”
Every advertisement that features alcohol as the product showcases glamorous, sexy, confident-looking people, often in sultry and sexually charged scenarios, attempting to get us believing that drinking is synonymous with both becoming one ourselves as well as the attracting of hotties, as well as, is a seductive activity in general (when in reality, consider anyone you know when they are drunk. “Sexy” is probably far from the adjective you would use to describe their behavior and aura).
“I like to have a drink every night to unwind after work.” An oft-made social remark throughout our culture. Again, using and relying on a substance in order to relax, feel better, and manage stressful emotions.
People downplaying, writing off or dismissing with regard to friends or loved ones who drink a lot with remarks like, “yeah, Jason always drinks a lot on Saturdays,” or “sometimes my dad drinks too much when he’s down, but you know, it happens. He doesn’t always do it.”
One of the most common, go-to dates is out for drinks. People often having several in order to “loosen up” and feel more comfortable around each other. Instead of challenging themselves with feeling the nerves, that initial awkwardness, and uncertainty, and yet, pushing through and learning to manage these tough, uncomfortable feelings on their own, they turn to a substance to help manage or even mute those feelings.

We make light of, even make chic, sexy, and completely encourage substance abuse in our society.

Even addiction is dismissable, assuming the person can function.
As long as someone isn’t stumbling around the streets homeless, or missing work constantly, or selling all their worldly possessions and stealing to pay for the substance in question, we don’t afford the abuse of alcohol much mind.
Instead, we laugh about it, dismiss or downplay it, and even urge it on.
I’m sure everyone has heard the background chant directed their way of “chug, chug, chug, chug!” At least once in their lives, though likely many more.
“Let’s go out drinking tonight,” the oft-made announcement come weekends for young and older adults alike. And of course, with nary a bit of confusion about the meaning, “drinking” referring to alcohol and often, to consuming it in some degree of abundance.
The weekend drinking can be especially insidious because, as long as someone relegates their drinking to the weekends, people rarely peg them as having a problem. When in reality, plenty of people who excitedly anticipate each weekend for the chance to then go out, drink, and “let loose”, do in fact have a drinking problem.

Someone can be an alcoholic who does not drink every day, as well as, someone can be an alcoholic who does not get blackout drunk.
Alcoholism is more about habitual behavior.
Does someone drink often, and following the same type of pattern? (Whether it’s two drinks most nights after work, or raring to drink come every single weekend, both of these people can be alcoholics).
Do they rely on or use frequently, the substance in order to “feel better”? To de-stress, manage their emotions, to “loosen up” or “have fun”?
Are they unable to set a limit? For example, if they say, “I'm not going to drink this week,” are they able to stick to this? Or, if they say, “I’m only going to have a drink or two tonight,” does that statement then reflect the reality? This cannot be hit or miss. It must be consistent. If someone is frequently unable to set and stick to a limit, they likely have a drinking problem.
Do they go out of their way to drink? For example, when hanging out at home with this person and they find, there is no alcohol around, do they then need to go out and get some, even though it’s inconvenient for them to do so? Do they seek out alcohol in situations where it isn’t particularly prominent or forwardly present?
Weare a culture that is problematic, who turns a blind eye to, as well as encourages, makes light of, laughs off, and even makes chic substance abuse, and even addiction- assuming it’s functional addiction.
“It is not a measure of health to be well-adjusted to a sick society.” Thus, just because “everyone else is doing it” doesn’t mean it’s healthy, good, or an ideal way to go about life.
Consider this issue more closely over the next coming weeks of your life. Watch carefully the way our culture promotes and encourages substance abuse. Notice how you feel, physically and emotionally, when you do not abuse substances. Observe how many of the people around you go along, almost blindly with the crowd, regarding this prevalent culture issue.
And, if you dare, challenge it. Both inside of yourself, and potentially even with some of the people you love, whom you observe may have substance abuse problems of their own.
It is only when we begin pushing back against, questioning, challenging, and refusing to go along with the aspects of our culture which are unhealthy or harmful, that the chance stands of things shifting, both within ourselves, as well as the world at large.