First on my list of Barcelona restaurant ravings is Flax and Kale.

Flax & Kale was ultra trendy, inventive and stylish.  A vegan restaurant which boosted the motto, "eat better, be happier, live longer," I certainly felt much happier after having dined here, as well as healthier (though maybe that was just wishful thinking considering the amount of food both my Mom and me consumed collectively).  80% of the menu is vegetable based, there are a plethora of vegetarian and vegan options, raw food dishes, many gluten free options and a few dishes including fish.  There is an entire menu for drinks alone, including an entire two pages of smoothies in an explosion of different flavors, all of which boost varying supposed health benefits based on their ingredients.  For instance, the smoothie dubbed "Forever Young" which includes ingredients such as carrot, apple, sweet potato, lemon, maca and flax, claims to help make skin glow, to help retain its firmness and to reduce inflammation in the body.

For my beverage, I tried the Coco Masala Chai which is made with purified water, almonds, young coconut meat, coconut sugar, cardamom,cinnamon, clove, black pepper, aniseed, ginger and sea salt.  It was incredibly delicious.  Light, milky, sweet with a slight kick.  My Mom took a taste and agreed it was super yummy.

For an appetizer, we split an order of the Mushroom Coconut Toast.  This was made with mushrooms, white wine, coconut cream, thyme and black truffle.  It isn't much to look at but we both agreed, absolutely delicious.  The bread was lightly toasted and just slightly crunchy.  The mushrooms were cooked to perfect tenderness.  The hint of coconut milk was barely detectable but added a creamy sweetness to the dish.

For my entree, I went with Orange is the new Healthy Cuore which was a spelt and turmeric ravioli filled with beta cerotenes (carrot, sweet potato, pear, maca, nutritional yeast, almond flour) and topped with a soft pumpkin sauce.  Another slam dunk of deliciousness.  The sauce was thick and creamy.  The ravioli was cooked to a perfect al dente.  A small crumbling of bread crumbs on top added a varying buttery, grainy texture.  The meal was awesome.

My Mom ordered the Green Power Ravioli which was baked eggplants and ravioli filled with spinach, tofu, mushrooms and cashews topped with ricotta and green sauce.  Also excellent (though in the end, I preferred mine).

For dessert (whew, SO much Food), we split the Grilled Carrot Cake which was just as it sounds, grilled carrot cake served with mango cream, mint sorbet and house made coconut yogurt foam.  This was dense but lightly sweet, nutty, filling and totally mouthwatering. 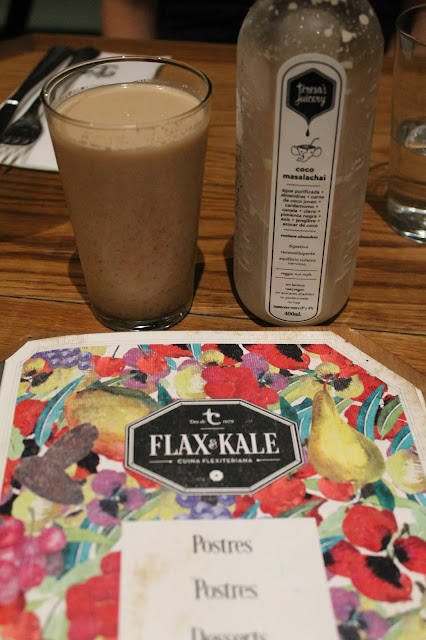 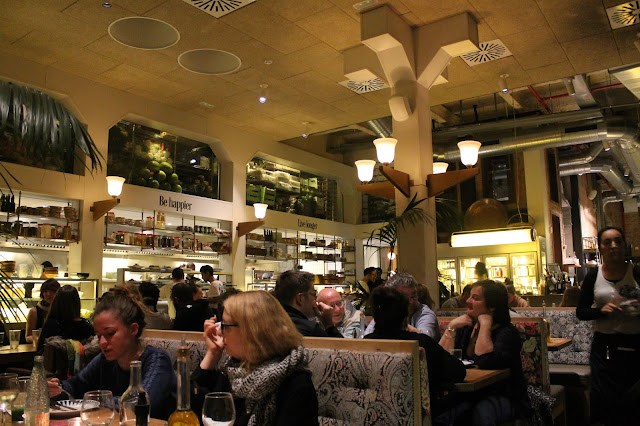 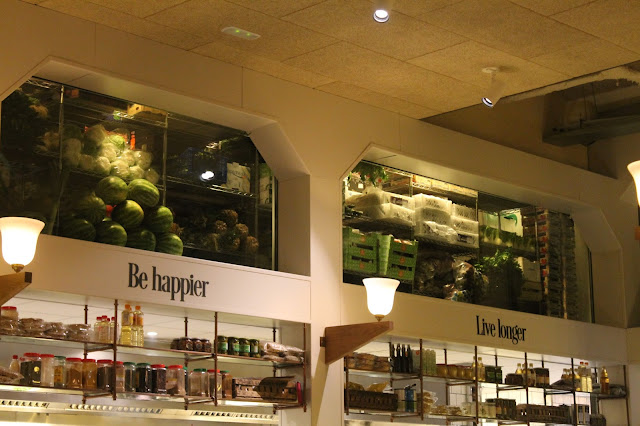 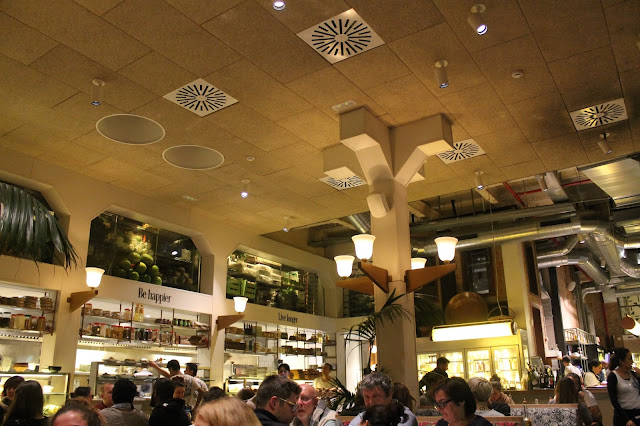 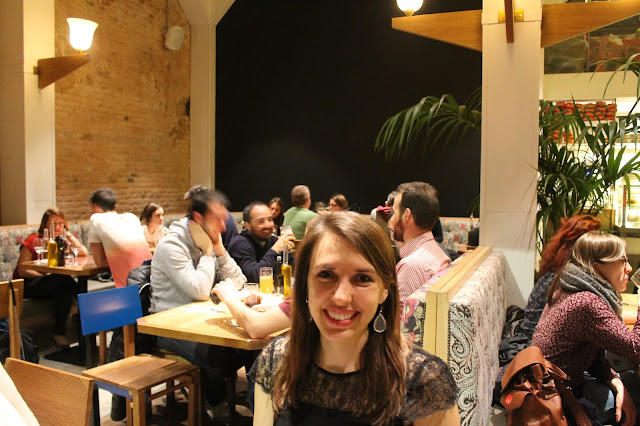 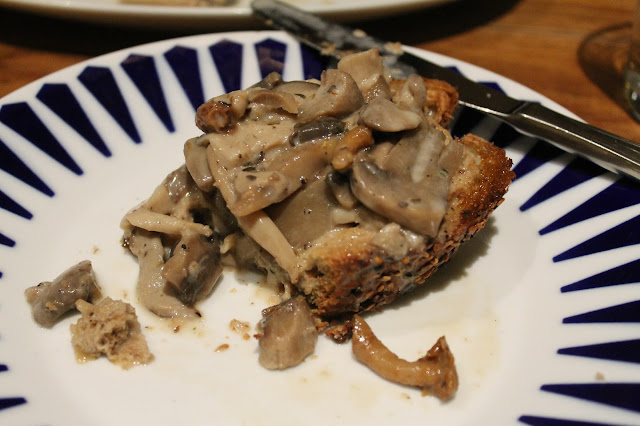 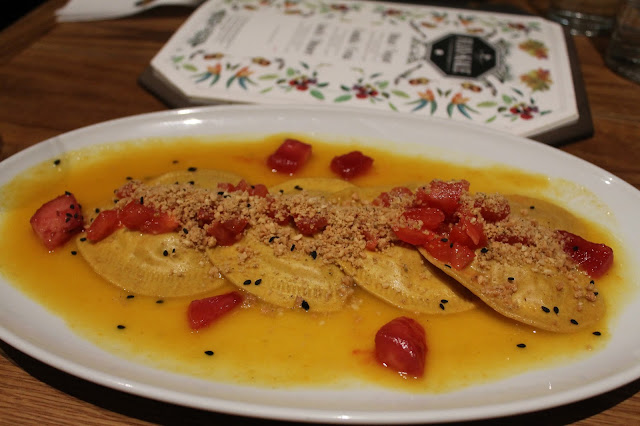 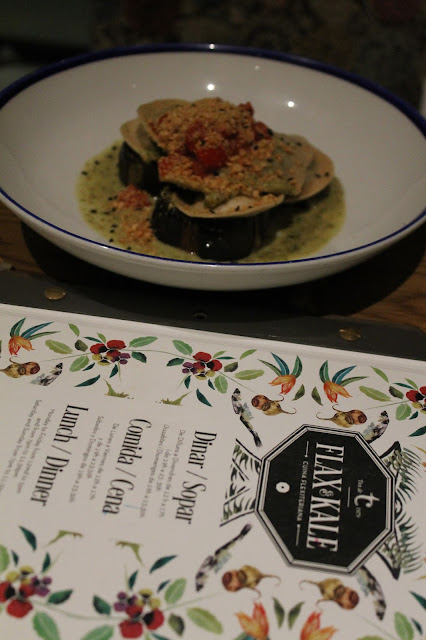 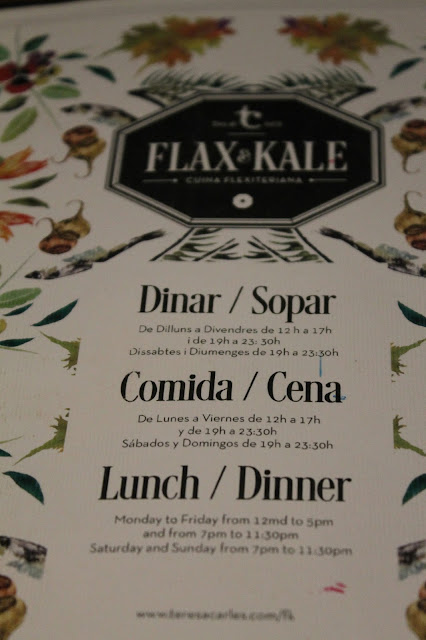 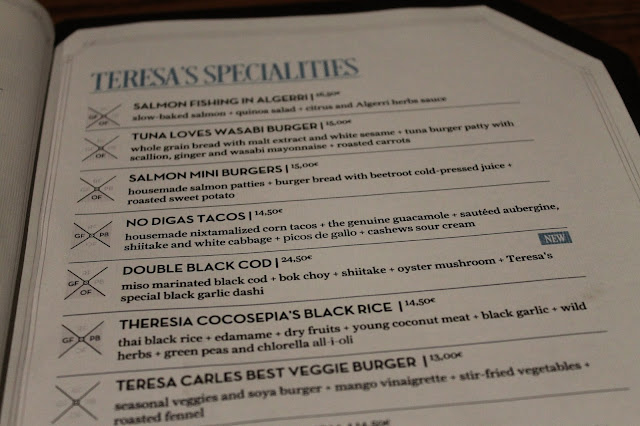 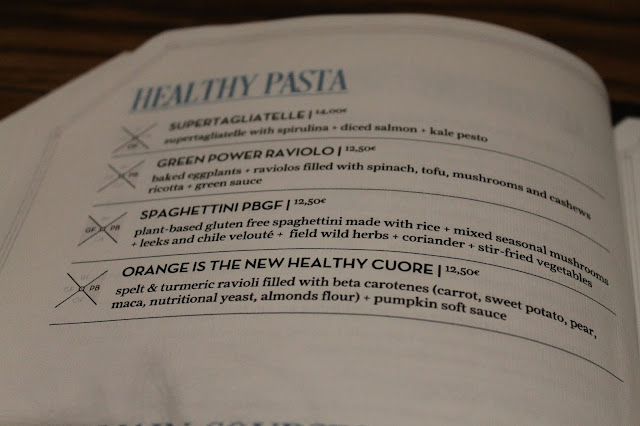 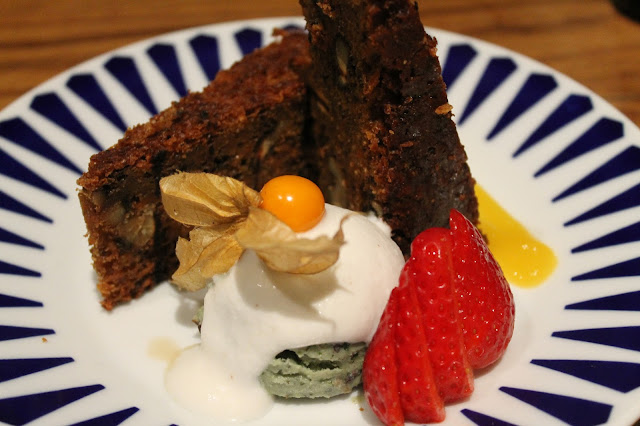 For more details and information about Flax & Kale regarding their location or menu, here is the link to their official website.

Now, onto my second review.  Barraca.  I read about this restaurant in one of the books our warm and wonderful hosts had lying around their flat.  Apparently this restaurant sits right on the oceanfront and has an expertly prepared, highly acclaimed menu of both tapas and seafood.  We were in, both for the location and sound regarding the quality of the food.

We hopped abroad the metro and then snagged a taxi from the metro to the restaurant, as it would have been a bit of a hike from the metro station.  The inside of the restaurant is heavily wooded, bright, beachy and warm.  Its inviting and classy.  Homey, charming and upscale all at the same time.

The manager/host, an Armanian gentleman, went above and beyond to woo and impress my Mom and me.  He treated us with the utmost of care.  He was polite, eager to impress and accomodating.  We were shown to a table with nearly an ocean view via the large picture windows all along the wall to our left.  We sat in the dining room which was cozy and bustling.  I felt as though I could have stayed there all night.  The atmosphere was great. 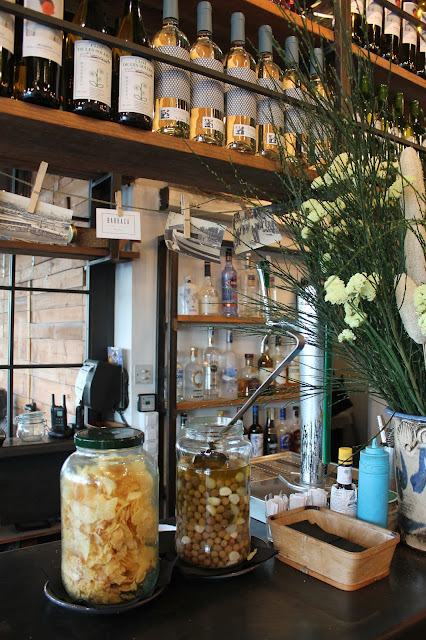 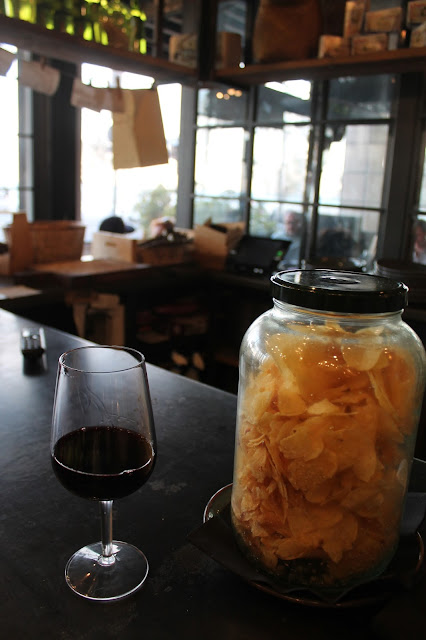 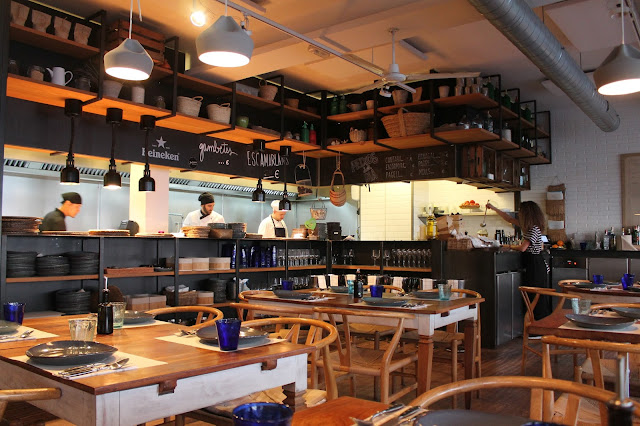 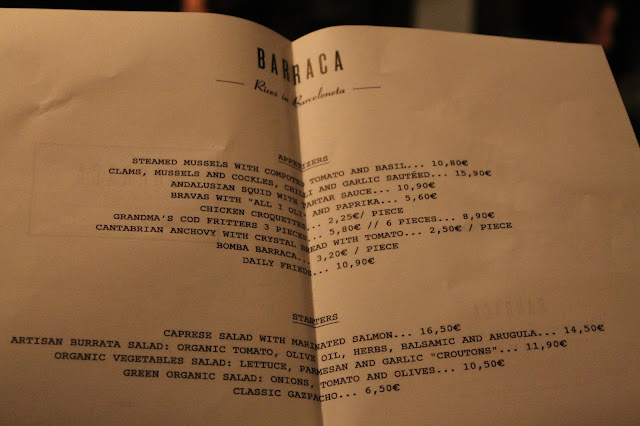 The menu was a limited one but all of whatever was produced from the kitchen and carried past us looked and smelled incredible.  We ordered the cod fritters and the bravas (potatoes) with aioli and paprika for our starters.  These were awesome.  Inside the cod fritters, the fish was soft, warm, tender and delicious, the outside lightly crisp and fried to perfection.  The sauce on the potatoes was to die for.  Creamy, tangy, with a slight kick.  It was almost like some sort of a ranch but with spice to it.  Bomb.

For her entree, my Mom ordered some kind of seafood stew which she said was absolutely incredible, to die for.  I ordered the caprese salad with salmon.  The accomodating manager was more then happy to have them cook the salmon exactly as I asked.  It was delectable.  I ate every bite.

For dessert, though we knew it would be excellent, we decided to go elsewhere as nothing on the sweet menu caught our fancy in particular.

We had a wonderful meal though.  The two of us lingered, having lots of meaningful conversation about life dreams, our happiest moments, our most romantic moments, future longings and dreams, etc.  This was an emotional pearl of an evening, alongside an incredibly mouthwatering meal.  It was the best. 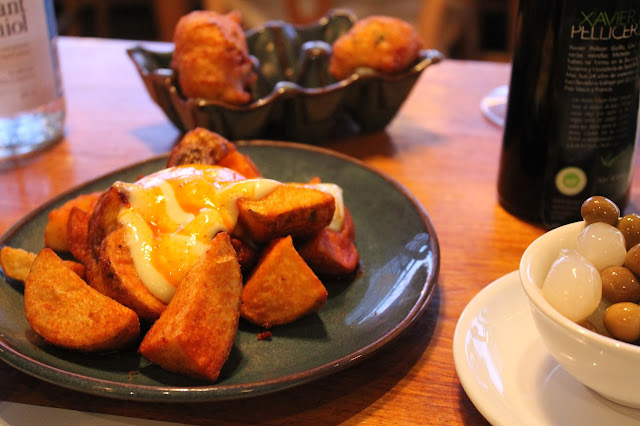 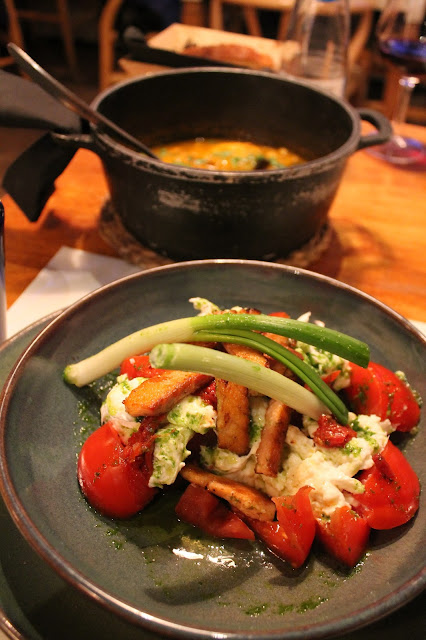 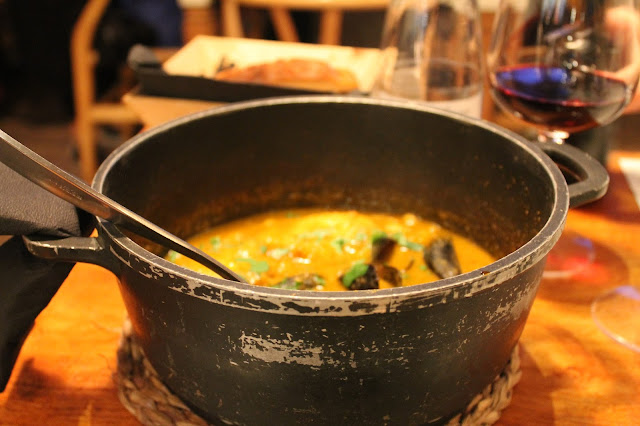 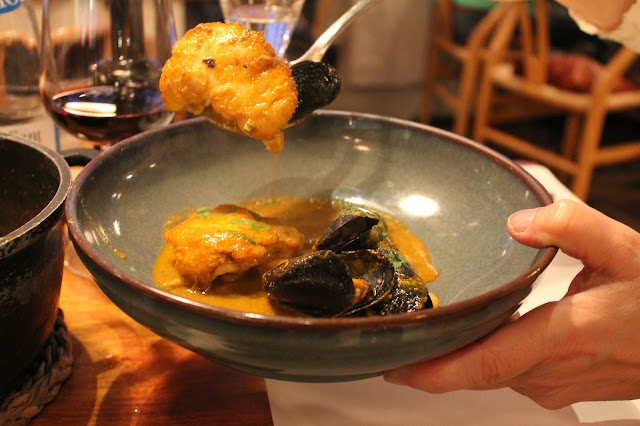 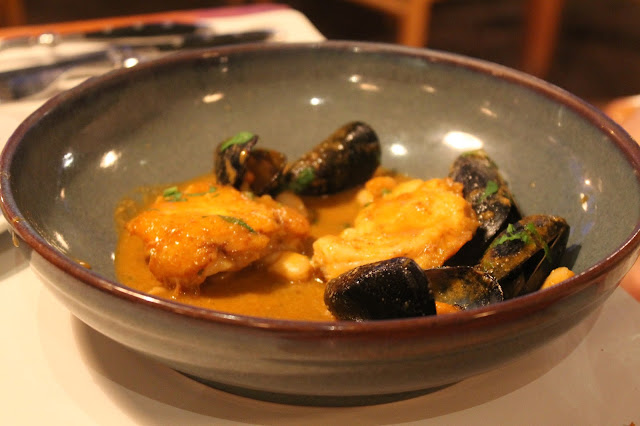 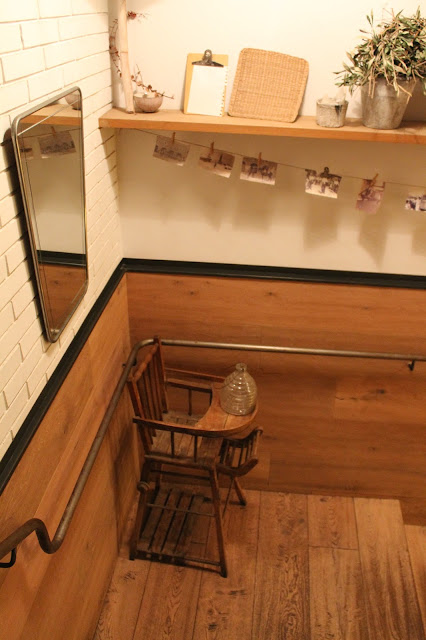 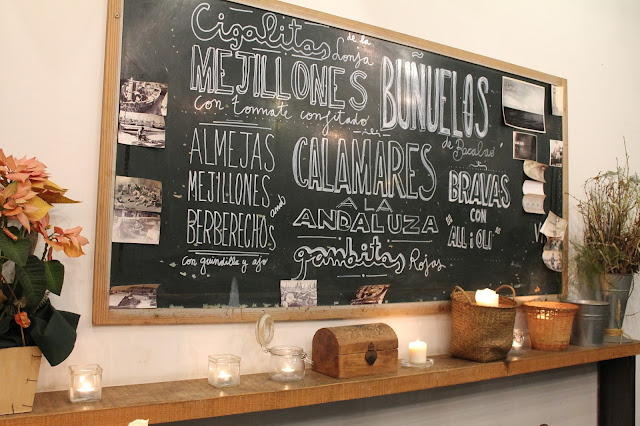 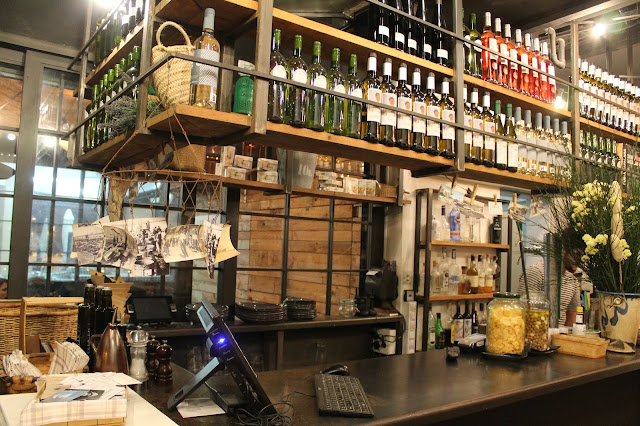 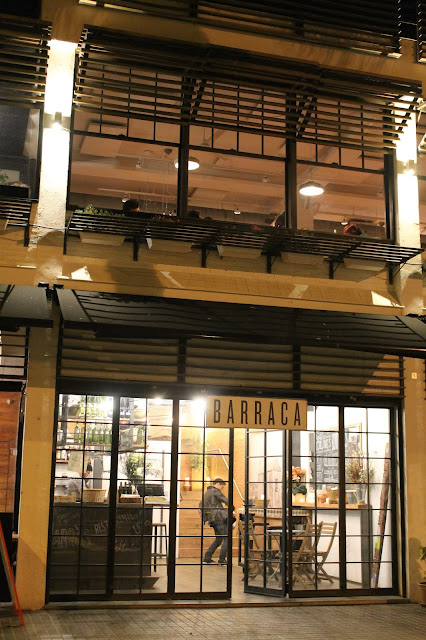 I cannot recommend either of these two restaurants enough.  If I find myself back in Barcelona, I will most certainly return to both.  They were that standout and great.  If you find yourself in Barcelona, you would be well off to make haste to both of these spots.  You will not be disappointed with either.