"My memories are running away from me, my love, like when you try to separate oil and water.  I'm constantly reading a book with a missing page, and its always the most important one."

"I know, I know you're afraid," she answers and brushes her lips against his cheek.

"Where is this road taking us?"

"We are back where we met.  The dance hall where you stepped on my toes is over there.  The cafe where I accidently trapped your hand in the door.  Your little finger is still crooked, you used to say that I probably only married you because I felt bad about that."

"I didn't care why you said yes.  Just that you stayed."

"There's the church where you became mine.  There's the house that become ours."

He closes his eyes.  Lets his nose lead the way.

For more than half a century, they belonged to one another.  She detested the same characteristics in him that last day as she had the first time she saw him under that tree, and still adored all the others.

"When you looked straight at me when I was seventy, I feel just as hard as I did when we first met," she smiles.

His fingertips touch the skin above her collarbone

"You never became ordinary to me, my love.  You were electric shocks and fire."

Her teeth tickle his earlobe when she replies.

"No one could ask for more."

No one has ever fought with him like she had.  Their very first fight had been about the universe; he explained how it had been created and she refused to accept it.  He raised his voice, she got angry.  He couldnt understand why, and finally she shouted, "If you think everything happened by chance but there are billions of people on this planet and I found you, so if you're saying I could just as well have found someone else, then I cant bear your bloody mathematics!"

Her fists had been clenched.  He stood there, looking at her for several minutes.  Then he said that he loved her.  It was the first time.

They never stopped arguing, and they never slept apart.  He spent an entire working life calculating probabilities, and she was the most improbable person he ever met.  She turned him upside-down.


That's a passage from the sweet little book below, "And Every Morning The Way Home Gets Longer and Longer."  While not a life changing, nor mind blowing read as a whole, I was taken with the love story, and in particular, the passages from such which I recounted above.  Really beautiful. 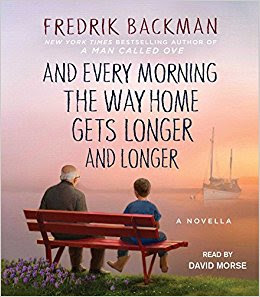 One of my now favorite authors, whom I stumbled on by accident and chance.  Her writing is poetic, lyrical, beautiful, resonating and just very moving.  She say beautiful, poignant things about life such as these:

--"I have gotten lost all of my life, maybe more than most, and have been found every time."

--"The mind that is not baffled is not employed.  The impeded stream is the one that sings."

--"This welcoming toward myself took a big adjustment, a rebalancing of my soul.  There had been so much energy thrown into my performance, achievement, and disguise.  I felt I had gotten a permission slip for the great field trip, to the heart of myself, in the protection of a few trusted friends."  (On learning to love, accept, and trust herself).

--"Its called having friends, choosing each other, getting found, being fished out of the rubble."

--"A fixation can keep you nicely defined, and give you the illusion that your life has not fallen apart.  But since your life may indeed have fallen apart at the moment, the illusion will not hold up forever, and if you are lucky, and brave, you will want to bear the disillusion.  You begin to cry and writhe, and yell, and then to keep on crying, and finally, grief ends up giving you the two best gifts.  Softness and illumination." (On the subject of facing loss and grief)

--"Where there is ruin, there is hope for treasure." 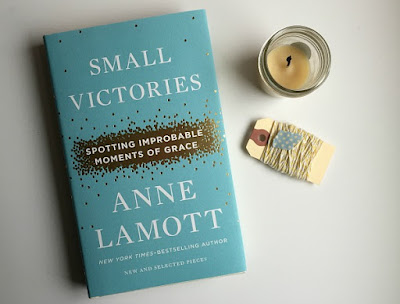 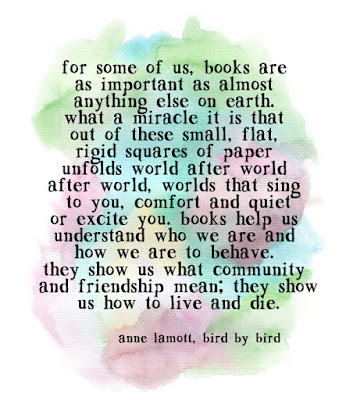 Hands down, one of the best books I have read in months.  I thought I knew a lot about love, until reading this book.  Then I realized, there is still so much to learn, and more ways to grow in the knowledge and practice of what loving truly is.  Here are some of the more mind altering, potentially life changing passages I found within.
Reading them has the power to shift what you think about and how you approach loving in your own life:

--To love someone is not just a strong feeling.  It is also a decision, a judgement.  In our Westernized culture, we say love is mostly something that appears suddenly, a spontaneous, emotional reaction of suddenly being gripped by irresistible feeling.  While this is a small aspect of it, in general, its more an act of will and choice.

--With regards to the practice of love (as he says, in terms of the art of loving, learning any art whether it be painting, engineering, writing, medicine, whatever, requires two things.  Mastery of the theory, and then practice)...he begins by talking about discipline being important in terms of mastering any art (including love).  I shall not be good at anything if I do not do it in a disciplined way, he says.  Anything I do only if I am "in the mood" may be a nice or amusing hobby, but I shall never become a master in that art. He says the problem isn't only the discipline of practice in that particular art(love or other), as in say, practicing every day for a certain amount of hours, but instead that it is that of discipline of ones whole life.

--Then he talks about concentration being a necessary condition for mastering an art (love or other).  Concentration though, is so rare in our culture now, he says, which leads to an unconcentrated, watered down, and diffused life.  We do so many things at once, such as read, listen to music, talk, smoke, eat, etc.  We are consumers with open mouths, eager and read to swallow everything.  Thus, we are rarely truly and totally focused on anything.

--A third factor that's important in the art of loving is patience.  For modern man though, patience is as difficult to practice as discipline and concentration.  Our whole culture and industrial system fosters exactly the opposite: quickness.  The quicker the better.  Of course, with some things, there are important economic reasons for this.  But, as in so many other aspects, human values have become determined by economic values.  What is good for machines must be god for man- so goes the logic.  Modern man thinks he loses something- time- when he does not do things quickly.  Yet, he doesn't know what to do with the time he does gain, except kill it.

--Eventually, a condition of learning any art is a supreme concern with the mastery of the particular art.  If the art is not something of supreme importance to the person, the apprentice will never learn it.  He will remain, at best, a good dilettante.  But will never become a master.

--He elaborates that concentration is by far more difficult to practice in our culture, in which everything seems to act against the ability to concentrate.  One must learn to be concentrated in everything one does.  Listening to music, in reading a book, in talk to a person, in looking at a beautiful view, in making love, in spending time with someone you care for, the list goes on.  The activity at this very moment must be the only thing that matters, to which one is fully given.  If one is concentrated, it matters little what one is doing.  The important, as well as the unimportant things, assume a new dimension of reality, because they have ones full attention.

--To be concentrated means to live fully in the present moment, in the here and now.  Not to think of the next thing to be done, while I am doing something right now.  Needless to say, he says, this must be practiced most of all by people who love each other.  They must learn to be close to each other without running away, in the many ways in which this is customarily done.

--Additionally, he says "avoid bad company."  And by bad company, he is referring to people who are vicious and destructive, that one should avoid their company because their orbit is poisonous and depressing.
As well as the company of zombies, he says.  Of people whose soul is dead, although their body is alive, of people whose thoughts and conversations are trivial, who chatter instead of talk, and who assert cliché opinions instead of truly thinking deeply.
Sure, it isn't always possible to avoid such company, nor even necessary (because for example, he says, if one does not react in the expected way to such types of people but instead, responds directly and humanely, one will often find that such people change their behavior, often helped by surprise effected by the shock of the unexpected).  But as much as possible, to avoid these types.

And then, to me, what were the two most potent passages:

--Real, deep love, experienced thus, is instead, a constant challenge.  It is not a resting place, but a moving, growing, working together.  Even whether there is harmony or conflict, joy or sadness, is secondary to the fundamental fact that two people experience themselves from the essence of their existence.  That they are one with each other by being one with themselves- rather than hiding from, sweeping under the rug, or fleeing from themselves.

--Faith and courage are major, paramount aspects of truly loving.  That without them, one cannot fully love.  He says, once one realizes this fully, they will also recognize that while one is consciously afraid of not being loved, the real, though usually unconscious fear is that of loving.
Because to love means to commit oneself without guarantee, to give oneself completely in the hope that our love will produce love in the loved person.  Love is an act of faith, and whomever is of little faith is also of little love. 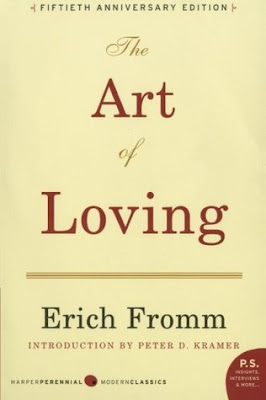