This past weekend, Maxx and I had the exciting and relaxing experience (I know, seems contradictory, eh?  Exciting and relaxing.  Rest assured though, it was both) of staying in a way cool, totally unique Airbnb spot called "Tiny Earth Cabin" situated in Canterbury, NH.  I booked such as one of 12 "year of dates" experiences for Maxx, my gift to him for our anniversary this past September.  The gift, just as it sounds.  A year of dates, so one per month.  Each date/gift, what I hoped to be a thoughtful, unique, quite fun experience.  Each date chosen carefully, with much research and thought, with Maxx and his tastes in mind.  Our night at the Tiny Earth Cabin serving as the October date. 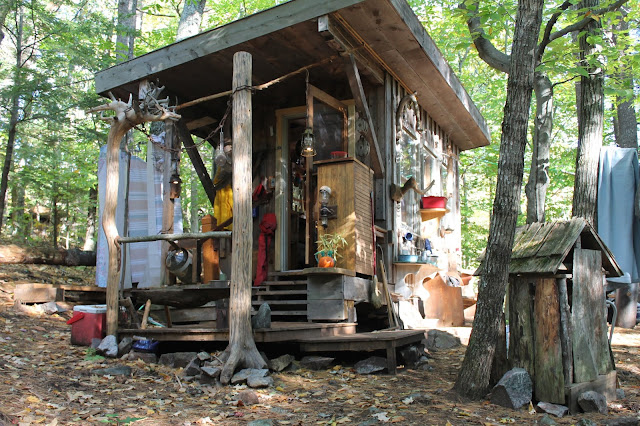 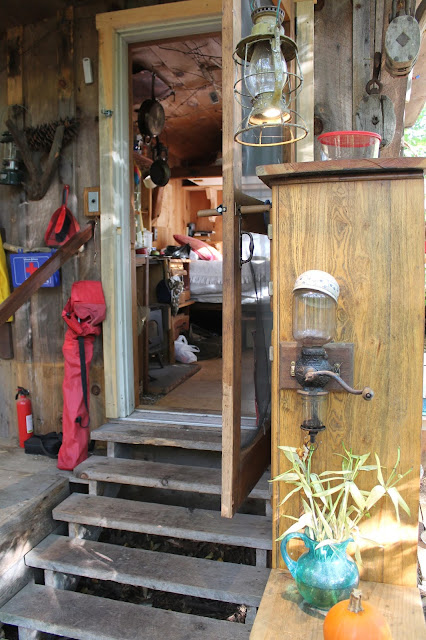 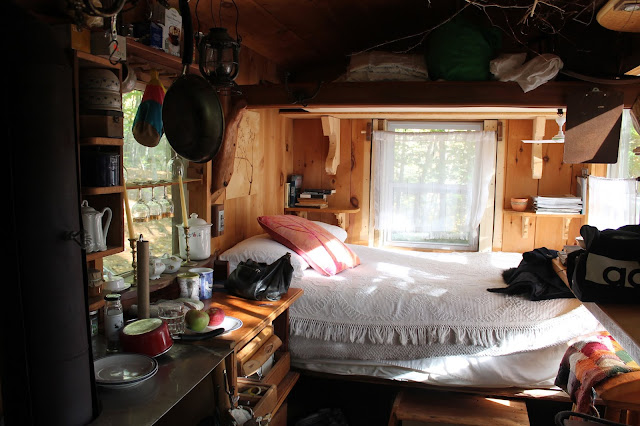 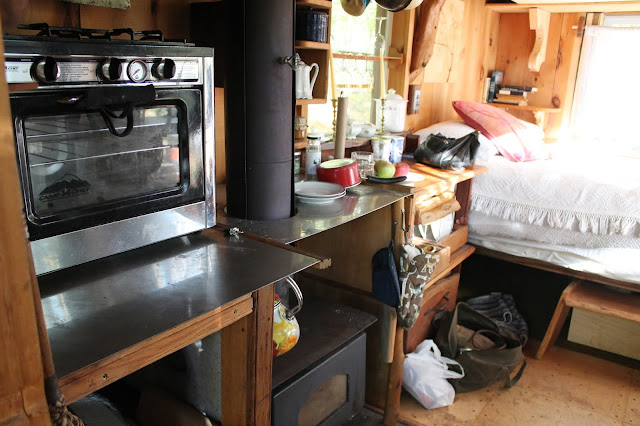 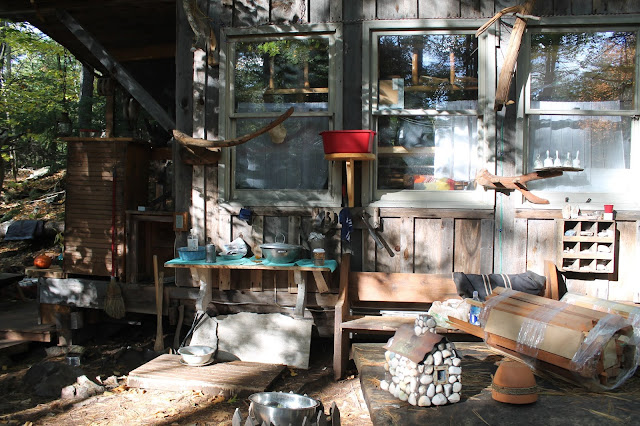 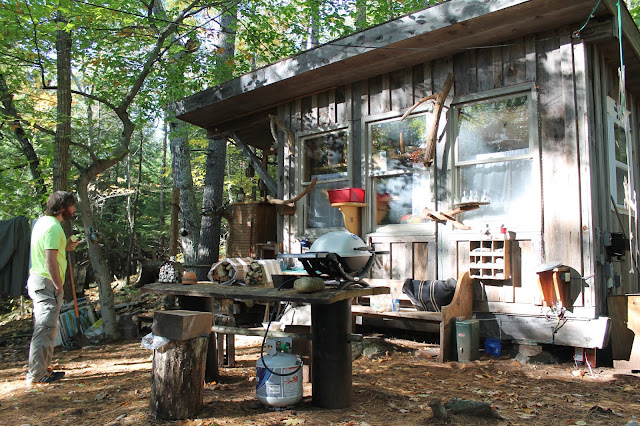 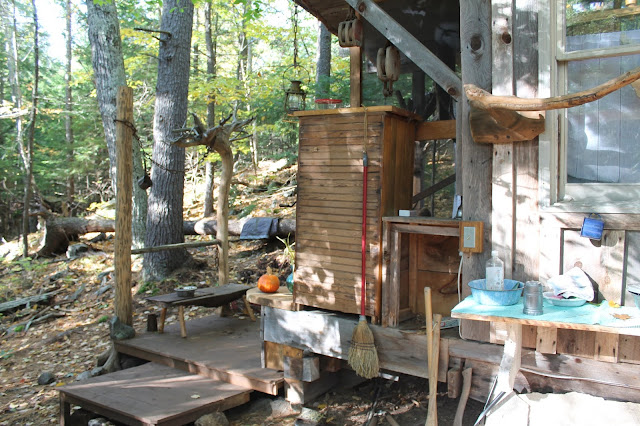 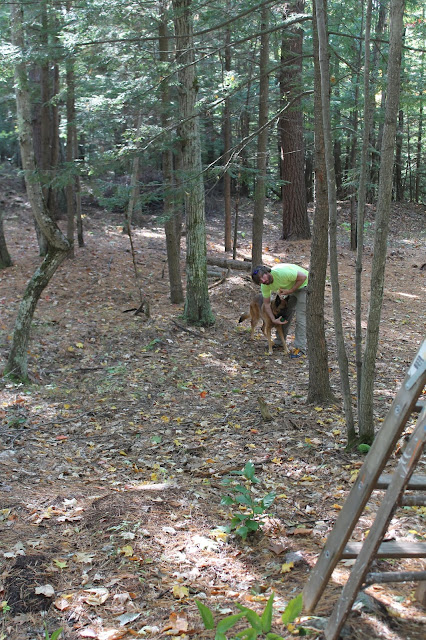 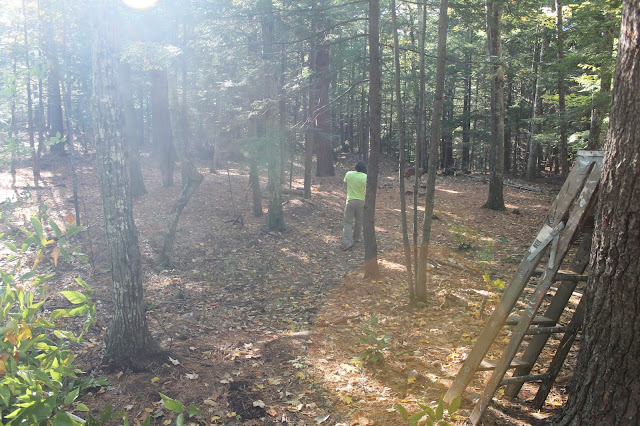 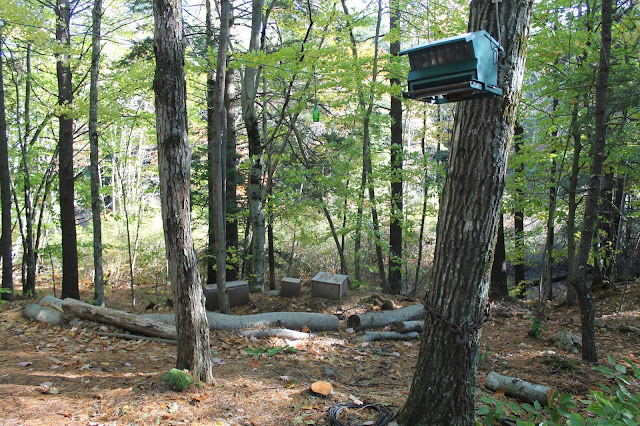 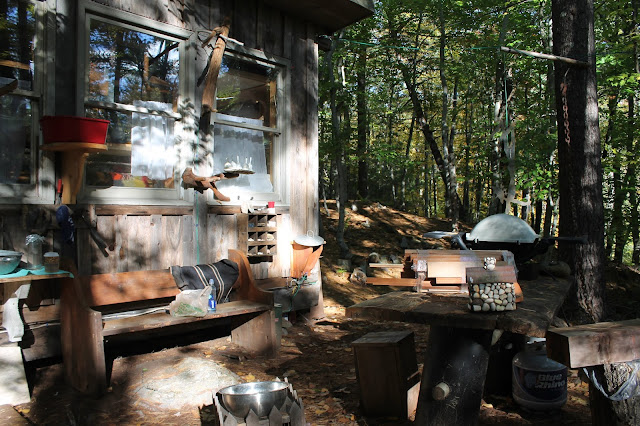 We arrived around 3pm on Saturday, the day relatively balmy, sunny, clear.  On driving the curvy, winding, uphill driveway, the two of us looking at each other both questioning and with excited anticipation.  The house at the top of the hill, a wonder to behold.  Never have I seen anything like it.  A mishmash of varying styles, all together in one massive, mansion esque house, apparently set on some 80 acres.  Parts of the house, log cabin esque, others in stone, some in tin and glass.  It was eye catching, way cool, a continual feast for the eyes.  Wildly interesting.  Clearly, the inhabitant, an artist to his core.  The house, a work of art in and of itself.

We were greeted by Paul (not the actual Airbnb host, Chance), who was friendly and helpful.  Showing us where to park and walking us through the woods to our little Tiny Earth Cabin respite.  The walkway to the cabin, winding, rocky, twisty and tree laden.  Really fun.  Roughly a five or six minute walk from the main house.

On arriving at the little cabin, we set our things inside and were shown around by Paul.  Where the lights were, the outhouse just up the hill beyond, the working indoor fireplace, etc.  The cabin was, as described, tiny.  One little main room, the two of us able to stand alongside one another on the inside, and thats about it.  The bed, which was plush, totally soft and cozy, taking up easily half of the space inside.

We spent the afternoon lazing and luxating inside.  Watching out the window at the leaves rustling in the breeze.  Ida played outside a bit, running excitedly, almost manic, through the trees and sloping wooded pathways.  Then come dinner time, we changed into fancier dress clothes and headed off to celebrate my moms 60th birthday with her.  Spending close to two hours with her and her friends, enjoying cake, appetizers, and fun conversation. 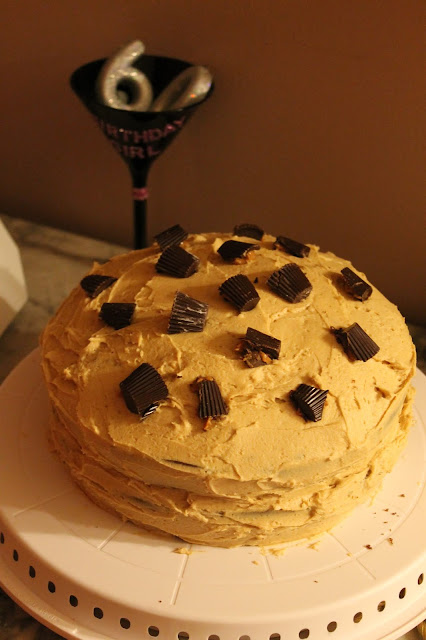 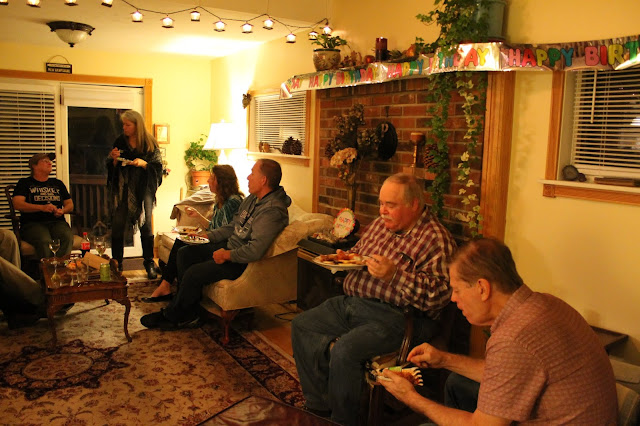 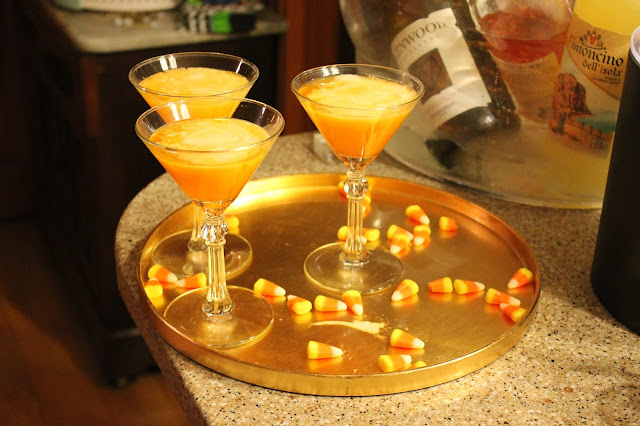 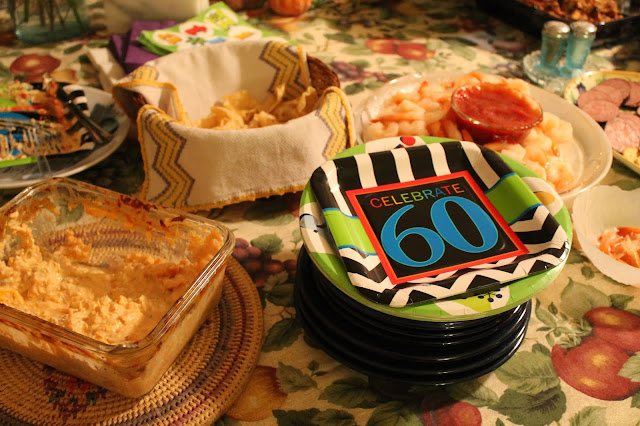 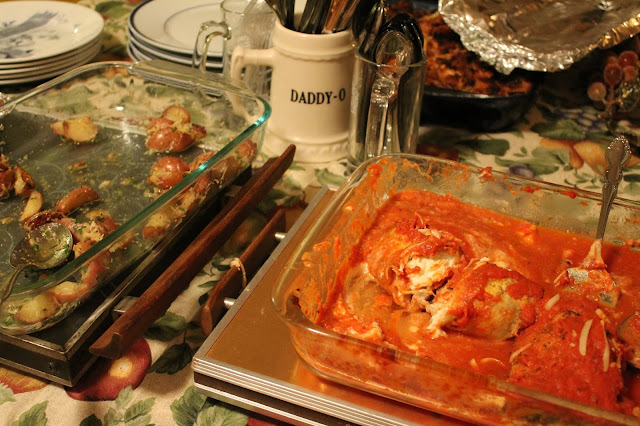 And then, we headed back to the cabin...where we experienced much relaxation, as well as something going bump in the night... 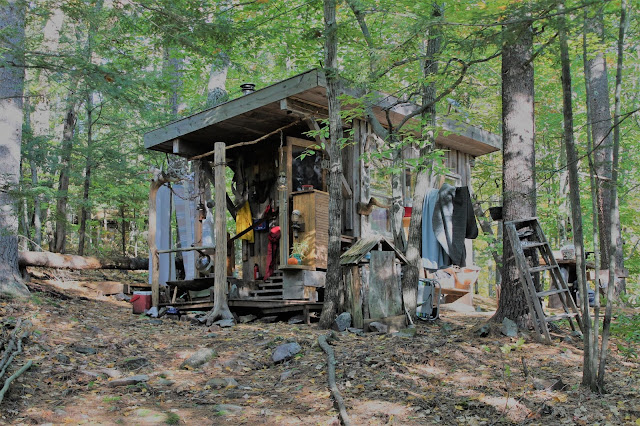 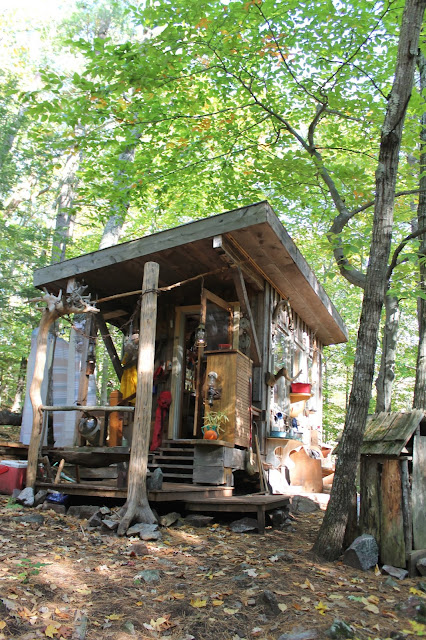 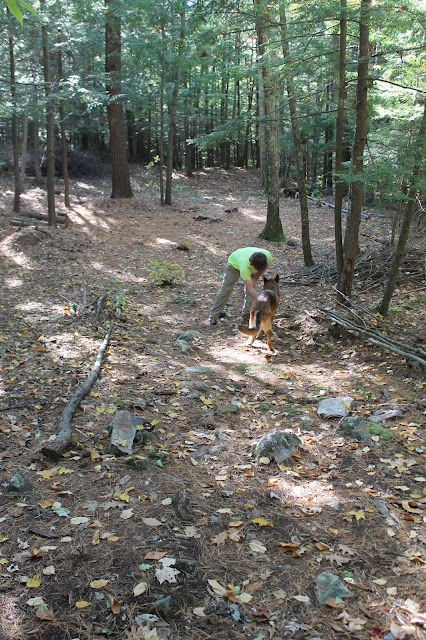 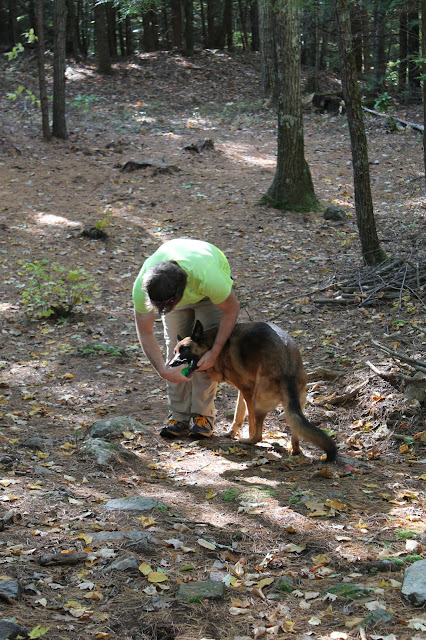 On our heading back to the Tiny Earth Cabin that night after dark, Maxx and I admitted to being a bit nervous about walking through the woods back to our little home for the evening.  Both a bit unnerved by imagined creatures of the woods, more likely, in our minds, to be coming out in full force on night fall.  Equipped with flashlights and, swallowing our nerves and replacing such with courage, we trapesed through the woods, pitch black, back to our cabin.  Making it safe and sound, whew.

On getting into the cabin, a sigh of relief rushing from both of us, as outside it was now quite cold.  The temperature having dropped into the high thirties.  We set about making a fire in the small hearth.  Romance and joy filling my soul, as a fireplace is one of my requisites for future imagined home, in whatever form that might take.  Fireplaces are just the best.  It took us a couple of tries but eventually, after thirty minutes or so, we got the fire roaring.  The cabin going from something like fifty degrees to being around eighty degrees.  Maxx remarking it being "like a jungle in here."

We battled it out over the board game, "Sorry!"  Giggling and staking bets over this newfound fun, our love of board games and partaking in such together, one of our most loved activities.  The cabin, aglow with the warmth and flickering of the fire.  Ida curled up in her bed, on the narrow expanse of floor just below us.

Following Sorry, we broke out Mille Bornes.  And then, halfway through, we heard it.  A loud, stomping, as well as scurrying and running around the outside of the cabin.  Something not insignifgant was rustling and clomping around just beyond our cabin walls.  Maxx and I pausing, staring at each other with eyes growing wide, went silent.  Listening.  Heartbeats getting loud.  Watching each other, our breathes picking up speed.

We sat and listened for several minutes.  Whatever this creature was, and it sounded like there might be more than one, heavy footed, walking right by the cabin.  Then at moments, scurrying and running.

"Should we look outside and see what it is?"  I managed to choke out in whisper.

Moving slowly, creeping, we turned off all the lights.  Blew out the candles.  Then, crouching side by side, peered out the windows into the dark wood beyond.  Nothing.  It went silent.  We didn't see anything.  The only sound audible in the cabin for several minutes, each of our breathing.

Totally creeped out, we continued listening.  Once more, we heard thumping.  A noise akin to horror movies when one hears something walking, with ominous heavy rhythm, closer, and closer.  Peering out the windows again, we couldnt locate it, whatever this thing was, with our eyes.  Again, it went silent.  The only noise, a breeze through the trees.

At this point, we got ready for bed.  My venturing outside, darting quickly, to brush my teeth.  Maxx, heroic and chivalrous, ever the brave boyfriend, coming along with to protect me <3.  I know he wasnt thrilled to be venturing out after that, yet still, he came.  And no scary stuff occurring on our being out there for some three or four minutes.

As we lay in bed falling asleep though, the room dark, we heard it.  Something on the roof.  Alternating between scurrying back and forth, then pausing and crunching loudly, as though eating through a thick slab of wood.  We heard it burrowing, clawing against the roof.  Then rustling and scampering to the other side.  I whispered to Maxx, "do you hear it?"  He nodded.

Maxx was asleep some minutes later, while I lay, listening to the noises.  Heart in my throat.  Soon thereafter though, with several deep breathes and careful analysis, I realized this was all good, and the fear totally in my head.  We were inside the cabin, safe and sound.  Whatever it was, and this time, it sounded along the lines of a small rodent, wasnt really to be worried about.  Sometime semi soon thereafter, I fell asleep.

Talking about it the next day in the car, we loved the experience in the Tiny Earth Cabin.  Finding it serene, relaxing, cozy and romantic, as well as a bit exciting ;-).  We laughed on the ride home, discussing the creature(s) of the night.  Debating what type of animal we thought it might have been.  Both downplaying how nervous and creeped out we were, giving each other knowing, playful looks.

It was a fantastic weekend adventure, to be sure.  I highly recommend checking out the Tiny Earth Cabin in Canterbury, NH on Airbnb.

For breakfast, we headed to The School House Café in Warner, New Hampshire.  Exactly what it sounds like, an old, historical school house thats been converted into a café.  Very charming and inviting.  The food was delicious.  Homemade diner type stuff.  Maxx had scrambled eggs, rye toast, hash browns, and one huge blueberry pancake which was fluffy, sweet, buttery, just delish.  I had an omelet with cheese and tomato, cinnamon toast, and hash browns.  So good.  Definitely recommend this spot.  Its relatively close to Mount Kearsarge, which is a great autumnal hike about 45 minutes from Concord, New Hampshire. 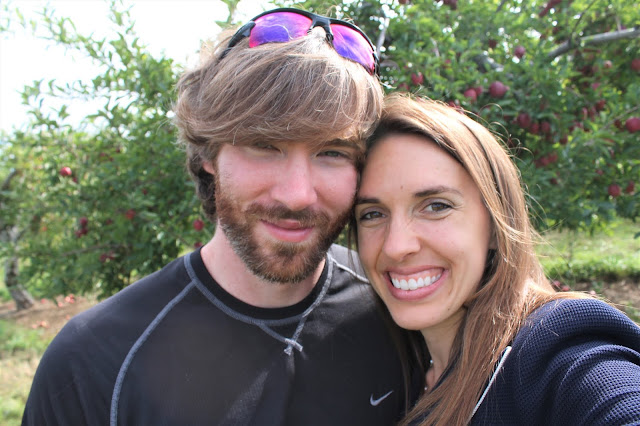