Baking up some Bee Sting Cake 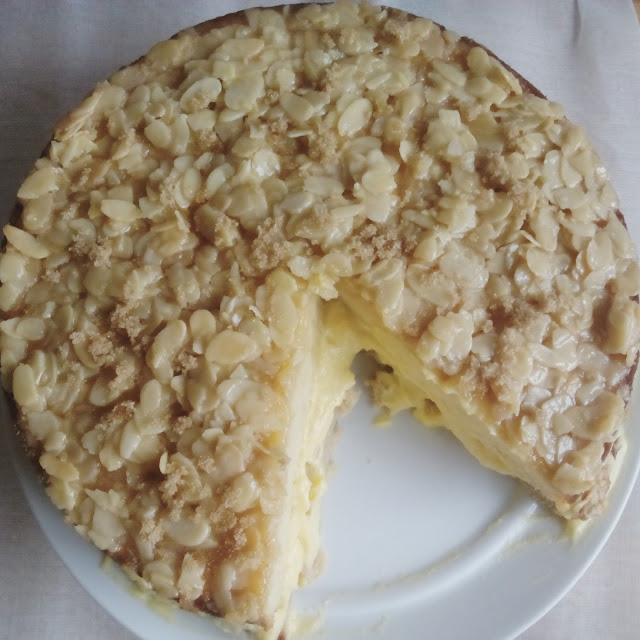 Bee Sting cake is the English translation for this delectable German cake.  In German, the name is Bienenstich.  This just happens to be, hands down, my favorite German cake.  It lands on the long list of worthwhile culinary uncoverings that I have happened upon in my time living abroad thus far.

What I hadn't realized beforehand was what a project this particular cake would be.  With two layers and a thick, almost custard-like pastry cream sandwiched in the middle, plus the cake being topped with a crusty, sweet, almond and sugar layer, I had my work cut out for me.

I began baking around 8pm and didn't finish until midnight.  Flour spotted the counter tops (and the floor, and my clothes).  Mixing bowls covered in various debris lay strewn across the kitchen surfaces.  Myself, sweating slightly in the 90 degree heat of the evening (which sadly, hadn't offered much respite from the steaming hot day prior).  A baking bomb had gone off in my kitchen.

Once well into baking and finding myself knee deep in the recipe, on impulse I decided to double the recipe in an attempt to make one thick cake that could easily be split in half, in order to easily heap the sweet cream in the middle.  I was hoping to cut my time in half by doing so, as opposed to baking two separate cake halves.  Instead, I ended up added more time to my evening.  Upon the doubled cake batter half baking, I discovered it was much too thin to split. It was barely thick enough to be one layer.

The pastry cream had been boiled, mixed, and taste tested.  The spoon licked clean.  The bowl covered in foil and shoved into the fridge to cool overnight.

The almonds had been mixed with sugar and honey, brought to a boil, stirred and cooled.  The result?  A grainy, incredibly sweet, crunchy burst of sugary deliciousness in ones mouth with each spoonful.  I restrained myself in order to have enough left to top the cake, but it wasn't easy.  Now you see part of why I bake in the first place.

I spread this finished sweet almond mixture on top of cake layer number one and baked it a few minutes longer, in order for the almond spread to meld to the top of this cake layer.  Everything seemed to be humming along smoothly. Which is of course, naturally, when a wrench will be thrown into the mix.

My discovery of another cake layer needing to be baked was made at 11:20pm.  Fabulous.  Disheartened, I threw together the ingredients and forgot to double the recipe like I had the first time around.  The finished result?  A nearly pancake-thin cake layer that I could barely scrap out of the pan.

This is going to taste like sh*t, I decided.

I plated each cake layer separately, covered them with foil and staggered off to bed.

In the morning, I assembled the cakes.  I spooned the pastry cream onto the pancake-of-a-cake-layer, trying not to explode with laughter while doing so.  This is not going to make for very symmetrical or pretty pictures, I sighed inwardly.  I perched the significantly thicker top layer on the pastry cream and stood back to survey my work.  The top layer seemed to slide slowly, precariously down whenever I went to lift the plate (to bring it back to my room for photos), so I had to move with the speed of a slow motion film while making my way back down the hall to my room with the heavily plated cake. 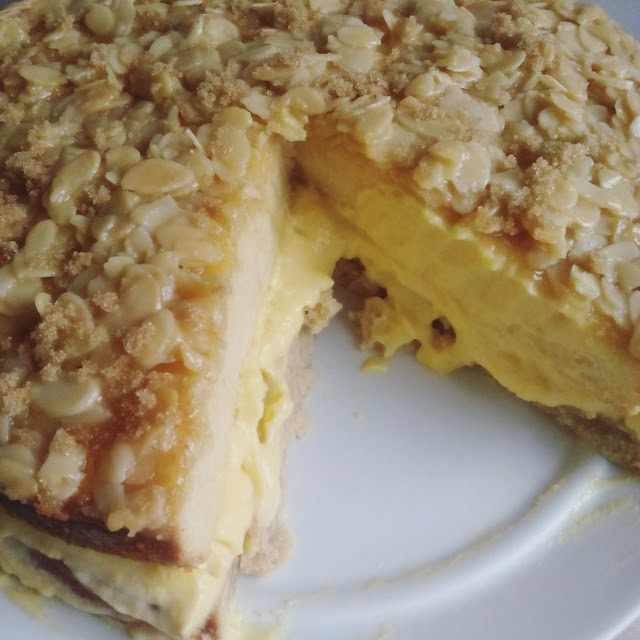 Finally, the photos were taken (not my best work but ok enough), and I decided to sample the goods.  What is baking without this obvious perk?  I expected nothing special.  I assumed disappointment.  A taste that would be forgettable and nothing noteworthy.  Possibly even gross.  However when I took a bite, I was all the more shocked.

The cake layers were dense but totally moist, cakey and soft.  The cream in the middle, the perfect sweet compliment.  The cream was a light breath of saccarine air atop the dense cake layer, a nice contradiction.  The top of the cake was the standout.  The honey sugar almond topping was slightly crunchy, honeyed, adding an interesting third texture dimension when paired among the pastry cream and tightly packed, moist cake layers below.

I could not believe how scrumptious it tasted, despite how funny and rather lopsided it looked.  I am proud to say, this might be one of the tastiest cakes I have ever made.

I need to recipe test it once more, in order to make sure I have the measurements just right before sharing with others.  I know.  Disapointing after reading this blog post, to be on the receiving end of this news.  I wasn't measuring with the most punctual of precision...so please, forgive my not including the recipe just yet.  But please stay tuned.  I will post the recipe sometime in the next week of two.  Brookes Bombastic Bienenstich...keep a look out. 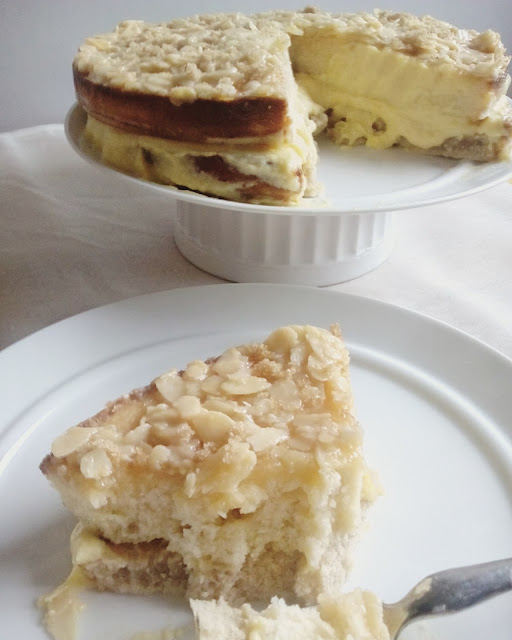 In the meantime, if after reading my post, you feel a gnawing compulsion to try your own hand at Bienestich before I am able to release my own recipe on here, I can provide you with a recipe to experiement with in the meantime.  Take a look here. 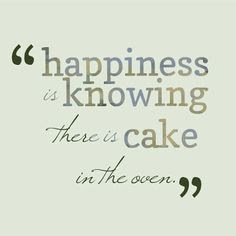