Safe People versus Unsafe People. Finding good ones (and avoiding those who arent)

Ever wondered, how can I choose good friendships or romantic relationships?
Who are the people to avoid?
What exactly makes someone toxic?
Are there specific personality traits to watch out for or do you just go with your intuition on these things?
What makes someone a "safe" or "emotionally healthy" person/relationship?

These are questions of paramount importance and actually, ones that most people do not consider in close to as much depth as they should.  They are incredibly important because our relationships/friendships/the family relationships we choose determine the quality of our life.

With whom you surround yourself has significant impact on things like: your happiness, your physical health, your accomplishments, your emotional wellbeing.

Learning the answers to the questions above will help in both finding and choosing relationships that are good for you (aka "safe people") and avoiding those that aren't (aka "unsafe people").  Making for a life that much happier, less stressful and filled with joy.  Your vibe attracts your tribe.  And we become like the 5 people with whom we spend the most time.  Choosing carefully is not something to be considered lightly. 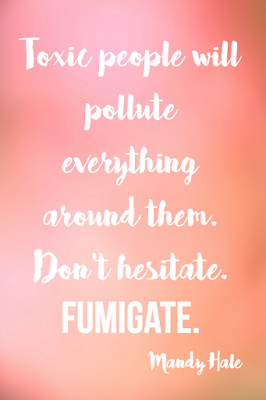 So, how do I spot these unsafe people?  What are the personality traits to look out for?


1.  Unsafe people are hateful and negative.  You know them.  The people who always have something to complain about.  This sucks, that is awful, that person is the worst, this was boring, that was horrible, that was too long, this was dumb, the list goes on and on.  Hatred and anger seep from this person most, if not all of the time.  Avoid these people like the plague.  They will smother you in their toxic darkness, pulling you down with them.

3.  Unsafe people are self righteous instead of humble.  They see themselves as "above all of that," meaning, most other people and things.  They have an "I am better than you" dynamic and attitude, resulting in those around them often feeling shame or guilt when in the company of this unsafe person.  They project onto others and cannot own their own shortcomings.  Instead, everyone else is wrong or bad, while they are just fine themselves.

4.  Unsafe people avoid working on their problems and taking responsibility.  Unsafe people resist character growth and maturation.  They do not admit they have problems.  They don't confess when having wronged someone.  They avoid facing relationship problems directly and openly.  They are not open to feedback or confrontation from others, instead often growing enraged by it.  They are not in the process of learning and growing.  And, the big one, they blame other people for their problems. 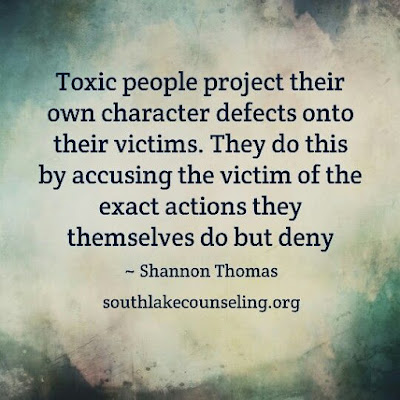 5.  Unsafe people lie instead of telling the truth.  We are all deceivers to some degree.  However the difference between safe and unsafe "liars" is that safe people own their lies and take responsibility for them.  Unsafe people see deception as a strategy to cling to, and as a way to manage life and relationships.
These people are also very untrustworthy.  At the first sign of feeling wronged or offended by you, they will turn around and likely stab you in the back.  Attempting to harm you through the eyes of others.

6.  Unsafe people remain stagnant instead of growing.  Each of us has both fixed aspects of our character and things we can change.  For example, a naturally aggressive person will probably not change to be naturally passive.  But that person can learn to channel that aggression in acceptable ways.
Safe people know they are subject to change.  And they want to mature and grow over time.  But unsafe people do not see their own problems.  They are rigidly fixed and not subject to growth.  These people can change but only will do so when there are enough limits placed on them that they are forced into great pain, humility and loss.  Without this confrontation, unsafe people will remain defiant and unchanged. 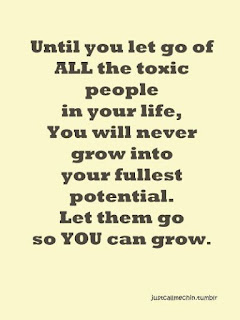 7.  Unsafe people lack empathy.  Empathy isn't easy.  It involves letting go of your own opinion and what you are needing so you can enter the world of another person, if only for a brief time.  We couldn't stay in the empathetic position permanently because we could lose ourselves.  But empathy is what makes a relationship real, and safe.  Being able to feel what another is feeling.  People who are unsafe lack this ability, of being able to leave their own world for a moment and truly feel for others.

8.  Unsafe people resist freedom instead of encouraging it.  We can easily asses this trait by asking yourself, "what does this person do with my "no"?"  Safe people encourage, value and nurture the separateness of other people.  Here are some things to look out for in determining this safety area:
-Do they respect my "no" when I state it?
-Do they withdraw emotionally when I say no?
-Do they hurt and "make" me feel guilty when I say no?
-Do they have a life (interests, hobbies, friends) separate from me?
-Do they encourage me to have a separate life too?

9.  Unsafe people condemn us instead of forgiving us.  Forgiveness is the glue of love, making it possible for love to do what it does best.  When people care about each other, forgiveness restores and reconciles.  Safe relationships are centered and grounded in forgiveness.  Unsafe people hold tightly to grudges and anger.

10.  Unsafe people are unstable over time instead of being consistent.  Are you the romantic/trusting/naïve type?  If yes, you are particularly vulnerable to unsafe people because you tend to trust people right away, instead of putting them through the test of time.  As cliché as it may sound, time is the best judge of character.  Character cannot be hidden over a lifetime.  It leaks out sooner or later.  And time tends to prove the truth.

11.  Unsafe people are a negative influence on us rather than a positive one.  Safety breeds safety.  Safe people make us better people for being around them.  Whereas bad company corrupts good character.  Good company builds up our hearts.


Deciding whether a relationship is good for you can take time and some long, hard, coldly objective analysis.  But look at your relationships over the long haul, and judge them for how they have changed your life, either for better or for worse. 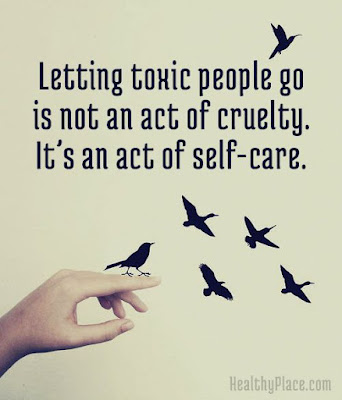 On the flip side, what are the traits of people who are safe?

Safe people are:
-open to feedback
-loving and kind
-a healthy, uplifting influence on us.  We feel like the best version of ourselves around them.
-encourage freedom in the relationship
-have empathy
-not defensive
-interested in and actively pursue personal growth
-honest
-humble
-good listeners
-positive
-take responsibility for their own mistakes/problems/issues


One important note: of course, no one is perfectly "safe" or 100% healthy all of the time.  Sometimes we all have unhealthy moments.  Maybe we initially react with some defensiveness to difficult feedback we are receiving, or we tell a lie, or we have a jealous/over reactive moment.  This is human.  The trick though to not being a perpetually "unsafe" person is in noticing these moments, being aware of when we make a misstep, and learning from it.  We all have moments when we act "unsafe."  What makes us safe people though is how we learn from these moments of unhealthiness that can emerge in each of us from time to time. 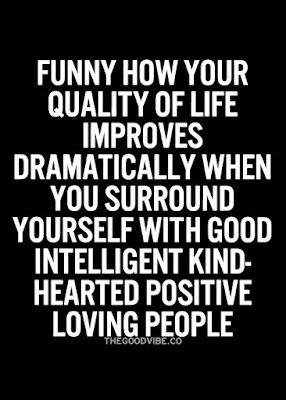 And the last section: why do so many of us choose "unsafe" or unhealthy relationships?

1. Inability to judge character.  This is one of the main reasons we choose unhealthy relationships.  Many times, when choosing important people in our lives, we do not think of character as the main factor.  Instead we look at how we feel, to whom we are attracted, or what seems to "pull" us towards certain people.  Of course, soul connections should not always be made on a rational basis.  How boring that would be!  Our unconscious part has wisdom of its own as well.  But.  We need to use both reason and emotion in choosing people.  We get into danger when we ignore reason.

2.  Isolation or fear of abandonment.  If we have trouble connecting in an intimate way with others, we will often pick people unable to connect as well.  If someone is isolated inside, they will pick isolating relationships until they address their own problems.  And when people are lonely/desperate, they often settle for unsafe or unhealthy relationships, being willing to grasp and gobble up any meager scraps they are thrown.  This is a recipe for choosing low quality relationships.

3.  Defensive hope.  This means hope as a protection of facing the sadness and grief that someone might not be so healthy for us after all, despite us wishing they were.  Sometimes, simply hoping a person will change keeps us from the pain we need to face, which is that actually, someone in our life might be hurtful or "unsafe" when we desperately wanted to believe otherwise.  Clinging to desperate hope will not change the person though.  In fact, it serves in keeping you clinging to something that continues causing you pain/unhealthiness.

4.  Fear of confrontation.  The inability to confront is grounds for having unsafe and hurtful relationships.  Being unable to confront someone is like having a body with no skin, or a home with no doors or fences.  Without this skill, its an open invitation for abusers and toxic people.

5.  Romanticizing.  This is when someone sees only the good and omits a huge part of reality.  Ignoring someone's faults, or worse yet, turning them inti strengths by viewing them romantically.  Viewing people this way is setting yourself up to meet many unsafe people.

6.  The Need to Rescue.  People who need rescuing are not taking responsibility for their own life.  And people who do not take responsibility for their own life are not safe, even though they may be very nice.  Ultimately, they are not growing and thus, are not fostering growth in the people who are spending so much time trying to rescue them.  So this ends up being a toxic, growth-stunting relationship on both sides.

8.  Guilt.  Guilt causes people to get involved and to carry on with unsafe or toxic people.  When we begin to deal with our guilt, we can get free of the hook that guilt inducers use to control us.


The majority of this information I got from the book "Safe People: how to find relationships that are good for you and avoid those that aren't" by Dr. Henry Cloud and Dr. John Townsend.  They are also the authors of the bestselling book "Boundaries."  I read this and thought it was excellent.  For more information on this topic, I recommend doing the same.  It can only serve to benefit you :-) there is no negative to be found in learning how to choose the best relationships.  Our lives can be leaps and bounds better when we choose our relationships carefully.  Only letting in the people who are Safe.  And keeping away from those that aren't.
Posted by missbrooke28 at 4:41 AM