Ginkgo is known as one of the best places not only to brunch here in Frankfurt, but also to eat in general.  And for good reason.

First lets set the scene.  The restaurant can be found on the bustling, ever happening, trendy, cafe-and-restaurant laden Berger Strasse in Frankfurt.  The exterior of the restaurant seems to be semi hidden in greenery.  This adds an eye-catching, at-one-with-nature, potentially healthy, and upscale air to the place.  A secret garden-like patio is tucked off to the side of the entrance, which is especially appealing during the season of the moment.

I have been here several times.  For the supposedly famed breakfast (which was totally delicious) with different friends on separate occasions, during which I usually had a scrambled egg platter with cheese and tomato which came with slices of crisp bread on the side.  I came here for dinner with two particularly special guests- two of my very close friends who were visiting me here in Frankfurt from Boston, MA.  I tried the veggie burger on this occasion, which was superb.  Earthy, slightly spicy, zesty and just delicious.  Really satisfying and filling.  I have come here on dates (a comical and memorable one in particular, over before things even started at the moment he told me he currently lives with his ex and intends to do so for well into the future.  Thats an interesting opening when trying to begin a new relationship, eh?), and with friends for appetizers (just recently, a great friend of mine and I were restaurant hopping down Berger strasse and this was one of our stops). 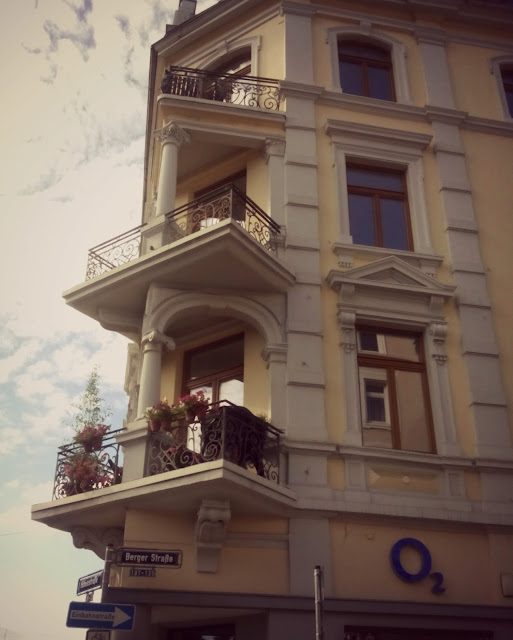 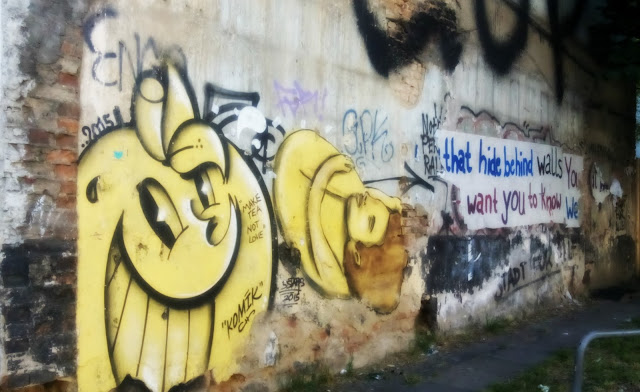 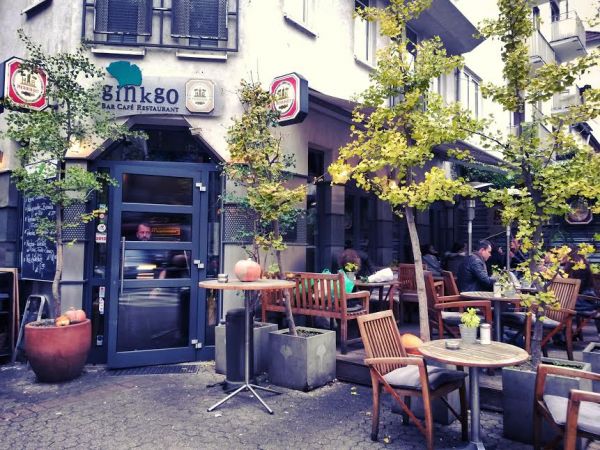 I have never been disappointed.  Though the service can sometimes be inconsistent (sometimes a bit on the slow side, certain servers are a tad frostier than others), the food always delivers.

Ginkgo offers an expansive selection of vegetarian and vegan options, as well as a delicious smattering of items for carnivores too.  The vibe of the restaurant is trendy, soulful, down to earth and cozy.  Like the girl next down who is approachable, natural and easy going, but also inviting, warm, and someone you want to get to know.  Ginkgo is the girl next door whom you continue to come back and visit time and time again.

On the menu for this particular visit was: Sweet potato pancakes with seasonal veggies and goat cheese.  This was on the appetizer menu, so we assumed portions would be small.  We ordered the appetizer sampler platter as well, meat included.  On the sampler was a spread including salami (two different types, one cooked and one uncooked), manchango cheese, a small baked egg quiche-like item, jalapenos, sun-dried tomatoes, red and yellow pepper, meatballs, and an aioli dipping sauce. 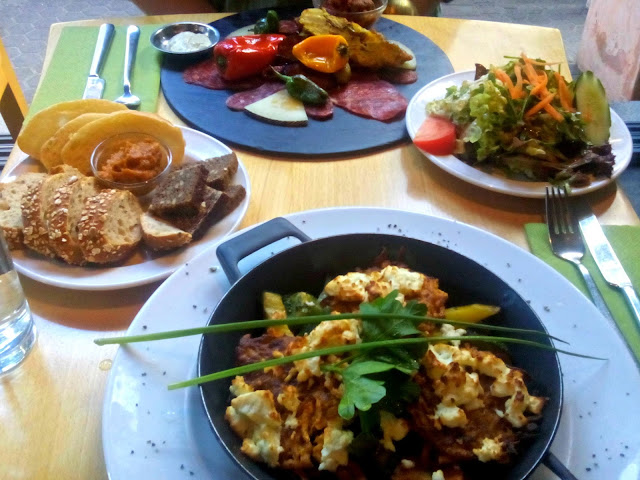 The sweet potato pancakes were excellent.  They had a subtle spicy kick to them.  The pancakes were made of grated sweet potato which offered a more substantial texture and consistency, offering better mouth-feel as opposed to if the potatoes had simply been mashed and fried that way.  The goat cheese added a subtle sour tang, a complimentary counter-balance with the sweetness of the potatoes.  The seasonal vegetables were lightly crisped, not overcooked nor under-cooked, they were just right.  Though my co-diner and I did laugh at the strangeness of the garnish on top.  It looked like a long piece of grass set across the top of the plate.  "A stray leaf has brown across my plate," we laughed to one another.  It was pointless and slightly distracting.  However, I loved the rustic little skillet that the dish was served in. 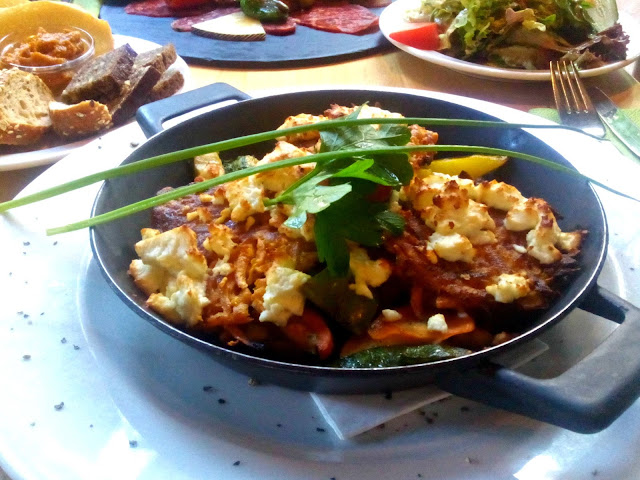 The prices at Ginkgo are not cheap, but one does receive portions in line with what they pay.  We agreed we could have eaten both of our dishes as entrees as opposed to appetizers (which is actually what we ended up doing).

A side salad was served with the potato pancakes.  The lettuce was fresh and crisp, the salad bright and delicious.  We agreed it had been "over dressed" though (as in, too dressing laden.  Less salad dressing would be better, or even serving a small container of it on the side instead of putting it directly on the salad for the customer).

We loved the presentation of the appetizer sampler.  The assortment was colorfully fanned out in a charming sense of organized chaos around the platter, all of which was served on a piece of slate.  This lent the dish a caveman cool, natural, trendy tone.  We liked that the food was all served on one platter.  This kept everything more contained and thus, easier to mix the flavors and sample from everything with ease.  The meatballs were excellent.  Lightly spiced in a tomato pepper sauce. 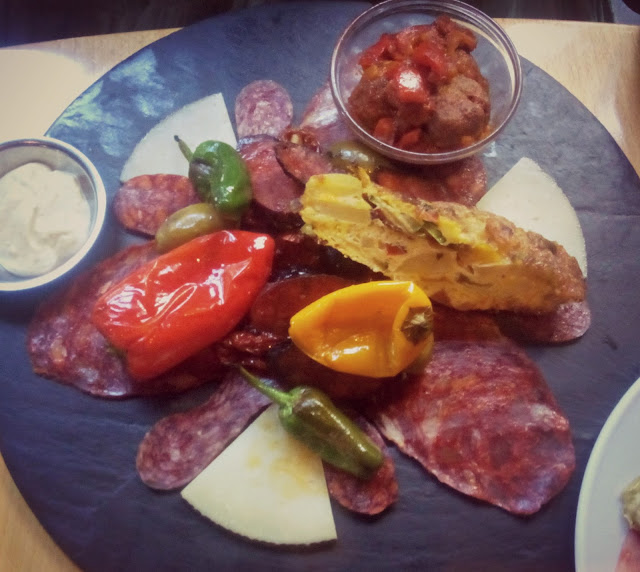 We were served a hearty selection of three different breads (one dark, one seeded and one white), with a side of vegetable spread.

The spread of cakes during the weekend buffet is just mouthwatering.  Ginkgo has a plethora of different desserts on offer, many of which are vegan.  I will have to return sometime soon for a cake tasting review ;-)

All in all though, I highly recommend a visit to Ginkgo.  This is definitely an excellent restaurant in Frankfurt.